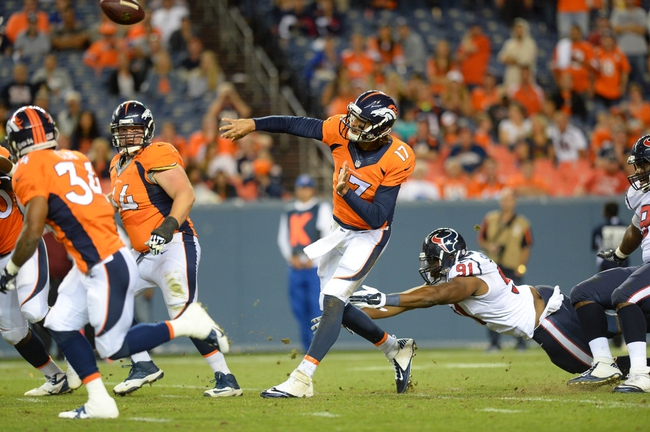 The Broncos look to steal a preseason win in Houston on Saturday as the “Hard Knocks” crew continues their journey in front of the cameras.

The Denver Broncos lost some pieces throughout the offseason with Julius Thomas being the biggest name to move but they brought in some reserves and should once again being among the league's elite and a Super Bowl contender. Denver has been the class of the AFC West since Peyton Manning arrived and while the Chiefs, Chargers, and Raiders are all getting better this is still Denver's division to lose and they are in good shape on paper. Brock Osweiler has thrived in the preseason thus far and perhaps the future of the Denver passing game will continue to get looks in this one as he matches up against a Texans defense that will be quite strong but will have a ton of question marks offensively.

The Texans have taken a step back over the last two seasons as they went from being an AFC favourite two years ago to stumbling to the league's worst record and now they are without a legit starting quarterback and are without Arian Foster for the foreseeable future. Houston could be in for a tough season and while the AFC South has already been locked up by the Indianapolis Colts the Texans could have had a good shot at a wild card but even that looks slim now and a .500 record would be considered an accomplishment in my opinion. Houston is favoured in this spot as they are at home but again I like the way Osweiler has been throwing the ball and in the end I don't think the Texans have nearly enough to compete even if it is a preseason game.