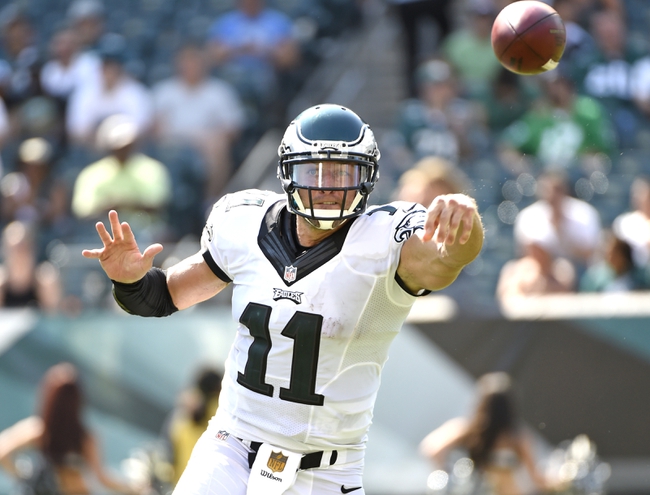 The Baltimore Ravens are coming off a 30-27 preseason win over the New Orleans Saints. Matt Schaub led the way with 134 passing yards and a touchdown while Joe Flacco completed five of six passes for 33 yards. Schaub and Bryn Renner will continue to get the bulk of the reps while Flacco plays a drive or two. Lorenzo Taliaferro led the Ravens with 36 rushing yards on 12 carries and Michael Campanaro had 58 receiving yards and a touchdown. Look for the Ravens to work on their running game that averaged just 2.7 yards per carry. Defensively, Arthur Brown led Baltimore with six tackles, Chris Greenwood had a tackle for loss and Za'Darius Smith had the team’s lone sack.

The Philadelphia Eagles are coming off a 36-10 victory over the Indianapolis Colts. Matt Barkley passed for 192 yards on 20 attempts and Mark Sanchez passed for a touchdown. Tim Tebow completed just 50 percent of his passes but rushed for a touchdown and should see more reps later in the preseason. Raheem Mostert led the Eagles with 33 rushing yards on 11 carries and Eric Tomlinson had 61 receiving yards on five receptions. The Eagles were extremely impressive offensively and averaged four yards per carry. Defensively, Brad Jones led the Eagles with eight tackles, Eric Rowe had a tackle for loss and Brian Mihalik had the team’s lone sack.

The Eagles are a threat to score at anytime even in the preseason, as Chip Kelly is able to give his second stringers just as many reps as the first. Hard to bet against Philly with the way they can move the ball.

The pick in this article is the opinion of the writer, not a Sports Chat Place site consensus.
Previous Pick
Top Ten Highest Paid NFL Players in 2015
Next Pick
Bears vs. Colts - 8/22/15 NFL Pick, Odds, and Prediction