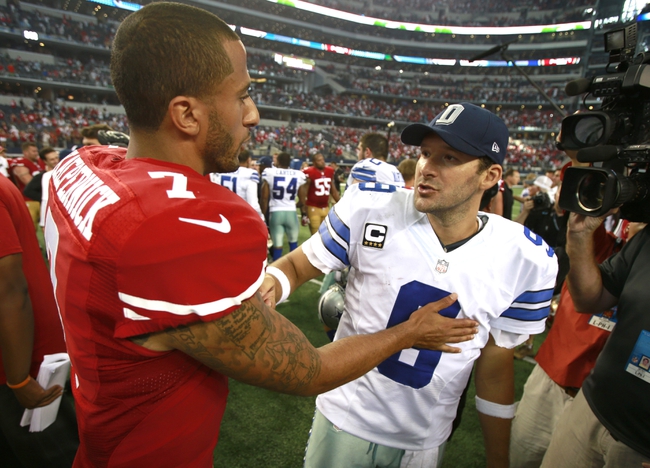 The Dallas Cowboys and San Francisco 49ers play a Sunday preseason game at the Levi's Stadium.

The Dallas Cowboys are coming off a 17-7 preseason loss to the San Diego Chargers. Dustin Vaughan completed 12 of 18 passes for 106 yards while Brandon Weeden and Jameill Showers combined for 82 yards. Tony Romo, who didn’t play in the first preseason game, is likely to see some time in this matchup. Gus Johnson led Dallas with 35 rushing yards and a touchdown while Gavin Escobar had 47 receiving yards on five receptions. The Cowboys must improve their ground game that averaged just three yards per carry. Defensively, Jonathan Brown led Dallas with five tackles, Corey White had two pass deflections and Lavar Edwards had a sack. The Cowboys had three sacks and allowed just three second half points.

The San Francisco 49ers lost their first preseason game to the Houston Texans, 23-10. Blaine Gabbert completed eight of 11 passes for 86 yards and a touchdown while Colin Kaepernick completed one of three passes. Kaepernick should see more playing time in this matchup given that he’s playing with a fairly new offense. Jarryd Hayne had 63 rushing yards on five carries and Jerome Simpson had 31 receiving yards on two receptions. The 49ers ground game averaged more than six yards per carry, which was an extreme positive. Defensively, Nick Moody led San Fran with nine tackles, Eli Harold had two quarterback hits and Shawn Lemon had two tackles for loss. The 49ers defense had six tackles for loss and allowed eight first half points.

Putting money into Gabbert doesn't sound so good. Romo should get a drive, and Weeden get the bulk of the other reps is a better option. I like the Cowboys and the free field goal here.

The pick in this article is the opinion of the writer, not a Sports Chat Place site consensus.
Previous Pick
Ottawa Redblacks vs. Toronto Argonauts CFL Pick, Odds, Prediction - 8/23/15
Next Pick
NFL News: Player News and Updates for 8/24/15