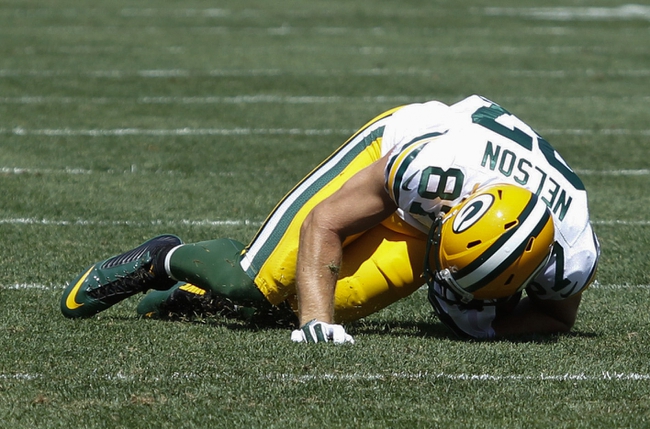 A Rundown of the NFL's Preseason Week 2 Injuries

It’s a rough morning to be a Packers fan (or the owner of my fantasy football team). If you don’t know why, you’ll find out in a just a minute. The top ten worst injuries of preseason Week 2 are below. Read at your own risk.

1. In last night’s loss to the Pittsburgh Steelers, Green Bay Packers star WR Jordy Nelson went down with a (reportedly) torn ACL. That’ll put Nelson out for the season and my fantasy league out of commission for the time being…

3. Pittsburgh Steelers Pro Bowl C Maurkice Pouncey rolled his ankle during last night’s match-up and is expected to undergo surgery to repair a broken bone. Pouncey isn’t likely to be on the field for Week 1.

4. Carolina Panthers DE Frank Alexander tore his Achilles tendon during Saturday’s preseason contest. It has been confirmed that Alexander will sit out the entirety of the 2015 NFL season.

5. Chicago Bears WR Marquess Wilson left Saturday’s win over the Indianapolis Colts in the first quarter with a knee injury. There is no official word on the severity of the issue, but Coach John Fox downplayed it during his post-game press conference.

6. New Orleans Saints WR Nick Toon will miss two to three weeks recuperating from a high-ankle sprain. Toon should return early in the regular season, however.

7. Kansas City Chiefs LB Dee Ford suffered a rib injury during Friday’s preseason contest. As of now, it appears that Ford may have broken at least one rib. There is no word on when Ford will return to the field.

8. Baltimore Ravens RB Lorenzo Taliaferro left Saturday’s contest against the Philadelphia Eagles with a knee injury. There has been no official report on the extent of the issue.

9. Washington Redskins QB Robert Griffin III left Thursday’s contest with a concussion and a presumed shoulder injury. Griffin III has since been cleared of any shoulder issues and, provided he can pass the requisite concussion protocol, may appear in the team’s third preseason game.

10. Arizona Cardinals RB Chris Johnson missed this week’s preseason match-up with a sore hamstring. Johnson is expected to skip the remainder of the preseason, but is likely to be ready to go for Week 1.

The pick in this article is the opinion of the writer, not a Sports Chat Place site consensus.
Previous Pick
Bengals vs. Buccaneers - 8/24/15 NFL Pick, Odds, and Prediction
Next Pick
NFL News: Player News and Updates for 8/26/15