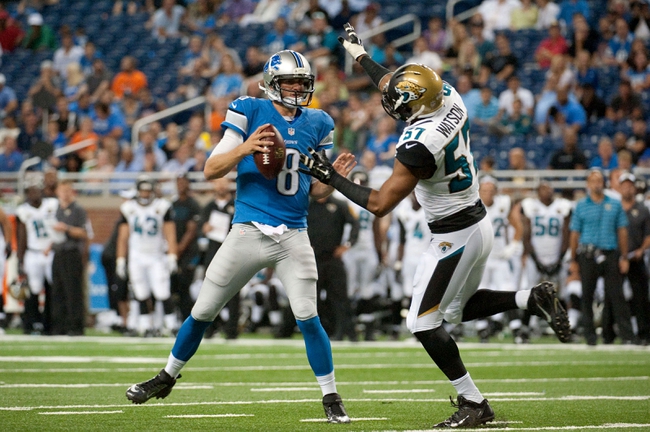 The Lions look to build some momentum heading into the regular season as they continue their preseason schedule in Jacksonville on Friday.

The Detroit Lions have undergone an overhaul of sorts and while it is tough to declare that when one major piece moves it was substantial enough in losing Ndamukong Suh that expectations in the Motor City are tepid from those across the league. The Lions had been a league contender over the last few seasons but with a down year (from his standards) from Calvin Johnson and some losing faith in Matt Stafford this could be a season where Detroit falls back into the NFC North basement with Minny on the rise and Green Bay being a Super Bowl favourite. Nonetheless, Detroit still has a ton of weapons and given the proper motivation could surprise a lot of people and getting into form in the preseason is a big step for this team who still has some roster decisions to make.

The Jaguars meanwhile are a team many think could make a push in the AFC South this season but a large part of that optimism lies in the rest of the teams in their division. Aside from the Colts who are arguably the AFC's top team, the division is paltry as both the Texans and Titans have huge question marks leaving Jacksonville, a team who drafted third overall this season, in a spot to be a team on the rise. Blake Bortles is in a make or break type season though it is still really early in his development and the receiving corps is actually acceptable and now with Julius Thomas there as a target they could fare decently well on the offensive side of the ball this season. As for Friday's game, I think the Jags take advantage of their roster uncertainties and get a much needed win at home ink what could be a final tune up for some of the team's starters.

The pick in this article is the opinion of the writer, not a Sports Chat Place site consensus.
Previous Pick
Patriots vs. Panthers - 8/28/15 NFL Pick, Odds, and Prediction
Next Pick
Toronto Argonauts vs. Edmonton Eskimos CFL Pick, Odds, Prediction - 8/28/15