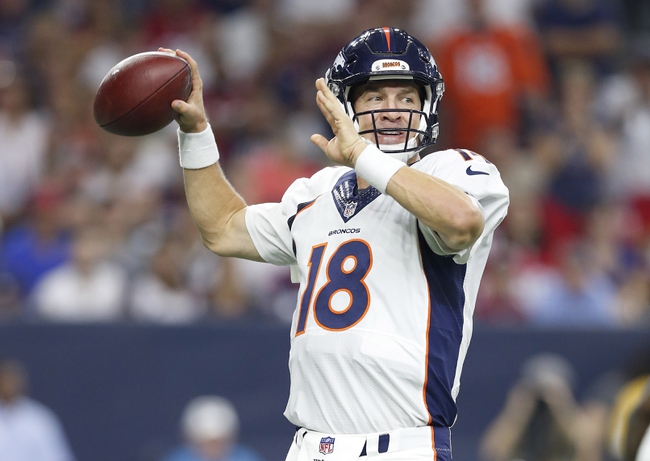 The San Francisco 49ers are 1-1 in preseason play and are coming off a loss to the Dallas Cowboys. Colin Kaepernick should get a ton of plays in this game after throwing just eight passes in the first two games. Backups Blaine Gabbert and Dylan Thompson have combined for one touchdown and one interception. Jarryd Hayne has more than 100 rushing yards on 13 carries and Jerome Simpson has 40 receiving yards on three receptions. Defensively, the 49ers have produced four sacks and allowed 29 points. NaVorro Bowman has two tackles for loss, Dontae Johnson has two pass deflections and Marcus Rush has one sack.

The Denver Broncos are 2-0 in preseason play and coming off a win over the Houston Texans. Peyton Manning has 14 pass attempts in one game, and I’m sure he’ll be careful when getting the bulk of the reps here. Backups Brock Osweiler and Trevor Siemian have combined for three touchdowns and one interception. Ronnie Hillman has more than 100 rushing yards on 16 carries and Andre Caldwell is coming off a 61-yard performance and one touchdown. Defensively, the Broncos have produced 12 sacks and allowed 30 points. Brandon Marshall has two pass deflections, Shaquil Barrett has two sacks and Darius Kilgo has two tackles for loss.

We're going to get a preseason game where one of the top starting quarterbacks and argubaly the best backup get majority of the reps. That sounds good to me. I like Denver to roll in this game.