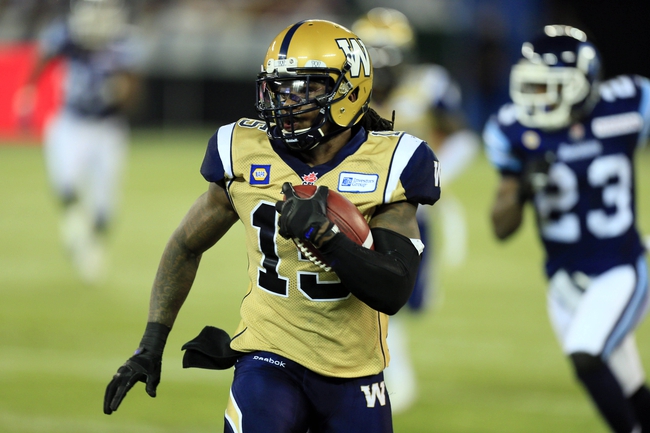 The Calgary Stampeders look to add to their three-game winning streak and pull away in the west. Bo Levi Mitchell is completing 64.6 percent of his passes for 2,168 yards, 12 touchdowns and six interceptions. Mitchell has seven touchdowns and two picks in his last three games. Eric Rogers and Marquay McDaniel have combined for more than 1,100 receiving yards and nine touchdowns while Jeff Fuller has 26 receptions. The Calgary Stampeders ground game is averaging 92.8 yards per contest, and Jon Cornish leads the way with 325 yards and three touchdowns. Defensively, Calgary is allowing 22.8 points and 339.4 yards per game. Deron Mayo leads the Stampeders with 35 tackles, Brandon Smith has an interception and Charleston Hughes has six sacks.

The Winnipeg Blue Bombers look to bounce back after losing their last two games. Robert Marve is completing 61.1 percent of his passes for 252 yards, one touchdown and two interceptions. Marve has thrown a pick in both of his games. Darvin Adams and Nick Moore have combined for more than 700 receiving yards and two touchdowns while Clarence Denmark has 22 receptions. The Winnipeg Blue Bombers ground game is averaging 97.9 yards per contest, and Paris Cotton leads the way with 268 yards and a touchdown. Defensively, Winnipeg is allowing 29.6 points and 385.6 yards per game. Khalil Bass leads the Blue Bombers with 44 tackles, Johnny Adams has four interceptions and Jamaal Westerman has six sacks.

I don't like the Blue Bombers at all with Drew Willy out. This game could get ugly with the way Calgary has been playing as of late.