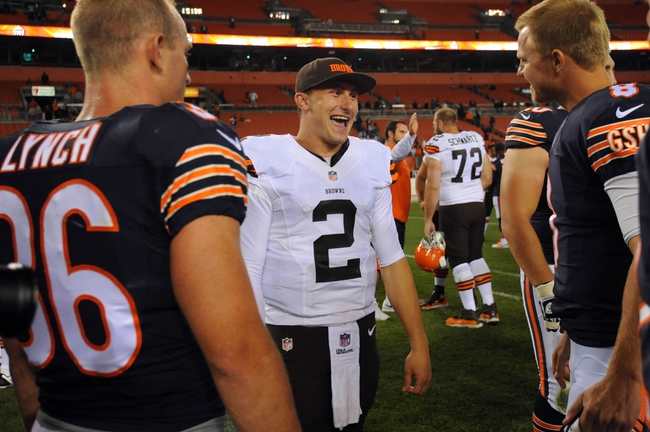 The Cleveland Browns and Chicago Bears meet Thursday in a preseason game at Soldier Field.

The Cleveland Browns are 1-2 in preseason play and are coming off a win over the Tampa Bay Buccaneers. Johnny Manziel’s status remains up in the air, which only guarantees we’ll see a lot of backup quarterback Thaddeus Lewis. Assuming Manziel is still hurt and Josh McCown is the starter, Lewis could play the entire game. In the backfield, Isaiah Crowell and Terrance West are forming a nice running back tandem. Wide receiver Josh Lenz has a chance to make the roster if he can continue to make plays. Defensively, Ibraheim Campbell led Cleveland in its last game with five tackles, Desmond Bryant had two sacks and Tramon Williams had a pass deflection.

The Chicago Bears are 2-1 in preseason play and are coming off a loss to the Cincinnati Bengals. With Jay Cutler sitting this game out, it will be Jimmy Clausen and David Fales’ chance to shine for the first time. The two quarterbacks combined for just nine passes in the last game. Jeremy Langford is making a strong case to become the backup running back and Rashad Lawrence is coming off a solid performance in his last outing. Defensively, Shea McClellin led Chicago in its last game with six tackles, Lamarr Houston had two sacks and Ego Ferguson had a quarterback hit.

Assuming Manziel plays or not, the Browns have far better depth at QB than the Bears do. I don't like the Bears QB's and that even goes for their starter who won't play in this game. Give me the Browns and the free point.