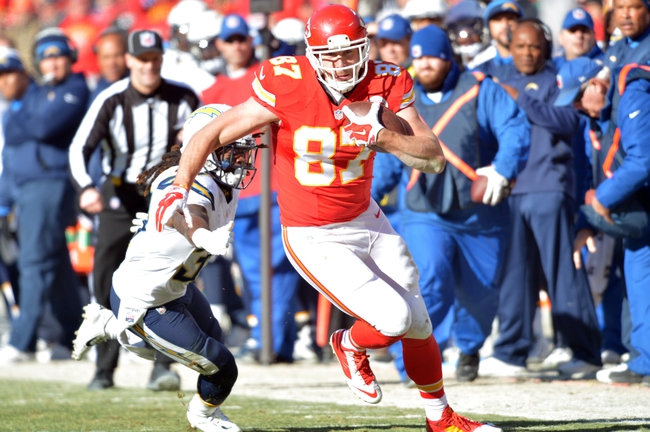 We have just two more days to wait until the official beginning of the 2015 NFL regular season, and the anticipation is drawing near a fever pitch. Let’s check out some of the day’s headlines in our morning wrap-up.

Former Bronco Montee Ball cleared waivers yesterday and officially became a free agent.
Denver waived Ball Sunday, completing his fall from being the team’s No. 1 RB just a couple of seasons ago. The Falcons have reportedly expressed interest in signing him.

There are a lot of question marks surrounding the Chiefs’ Travis Kelce, but KC coach Andy Reid is trying to dispel any speculation.
Reid said yesterday that Kelce is on pace to take the field during the team’s season opener on Sunday against Houston. Kelce is trying to get over a sprained ankle that cost him the final preseason game.

In other injury news, Arian Foster is reportedly ahead of schedule in his return from groin surgery.
Foster had his procedure early last month and was initially tagged with a 4-6 week recovery window. Exactly when he’ll be ready to go remains a mystery, but we’ll find out soon enough.

As for the Giants’ Victor Cruz, he wasn’t able to take the practice field yesterday due to his nagging calf issue.
Cruz will have to get in at least one practice this week before he’s able to play in Sunday’s opener, so we’d call him questionable at this point.

The Browns’ Johnny Manziel was able to throw passes during yesterday’s practice. He’s getting over a tendinitis issue in his right elbow, reportedly due to his throwing style.

The Panthers will be starting both Ted Ginn and Corey Brown at wide receiver this Sunday, according to coach Ron Rivera.
Ginn hasn’t logged a start since 2013, his lone season with Carolina. He posted a 36-catch, 556-yard season during that campaign.

NFL Weekly Schedule: Now that Week 1 is upon us, we can start looking forward to the official start of the 2015 NFL season. Let’s take a look at the upcoming round of games.