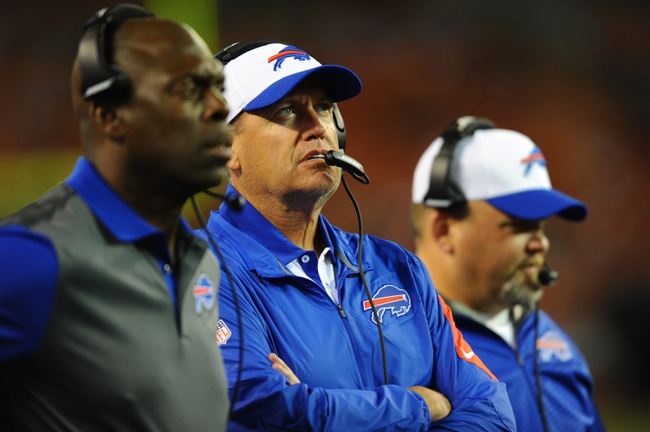 The Indianapolis Colts hope to take that next step this season after combining for 33 victories their last three years. Andrew Luck was already considered one of the top quarterbacks in the game, but now he has more weapons around him in Frank Gore and Andre Johnson, to go along with T.Y. Hilton. Like last season in which the Colts were sixth in scoring offense, Indy should be deadly on the offensive side of the ball. Defensively, the Colts were 11th in total yards allowed last season and 19th in scoring defense. Veteran cornerback Vontae Davis holds the Colts down on the defensive side of the ball and the addition of linebacker Trent Cole should also help. Dan Herron and Robert Mathis are questionable for Indy with injuries.

The Buffalo Bills have a new head coach in Rex Ryan and are chasing their first playoff berth since 1999. The explosive Tyrod Taylor gets the nod for Buffalo at quarterback, and he has a lot of weapons to help him out in Sammy Watkins, Charles Clay and percy Harvin. The Bills also upgraded at running back with the addition of former Eagle LeSean McCoy. Unlike last season in which the Bills finished 18th in scoring offense, Buffalo has some firepower to help fight back. Defensively, the Buffalo Bills ranked fourth in total yards allowed last season and fourth in scoring defense. Whether it’s Marcell Dareus, Mario Williams or Preston Brown, the Bills defense gets after it and is downright scary. Marquise Goodwin, McCoy and Leodis McKelvin are questionable for Buffalo with injuries.

This is a tough game to cap, as the Bills are drastically improved and have the defense that can rattle Luck. However, I'm not sure I can pick Taylor over Luck in a battle of quarterbacks, the position that I think heavily favors Indy and gives them the huge edge in this game. I have to side with the Colts and the small chalk here.