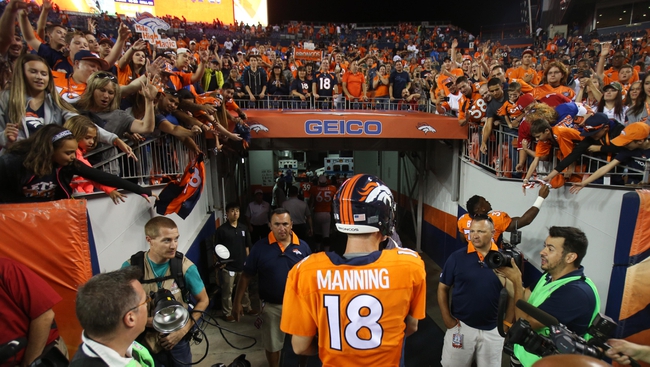 The Denver Broncos and the Baltimore Ravens face off on Sunday in Denver as they kick off their 2015 NFL football seasons.

The Denver Broncos have been regulars in the NFL playoffs but as the names and faces change this could be a transitional year. Peyton Manning is back at QB but last season his arm appeared to lose that consistent zip and his long ball skills appear to be diminishing. The Broncos ranked fourth in the NFL in yards per game at 402.9 and they were second in the NFL at 30.1 points per game. C.J Anderson is the feature back in the Denver rushing attack while the Broncos receivers feature Demaryius Thomas and Emmanuel Sanders who can be unstoppable at times. The Broncos defense was third best in the NFL in yards allowed per game at 305.2 but were tied for 16th in points allowed at 22.1 per game. Von Miller leads the Broncos pass rush along with DeMarcus Ware and Danny Trevathan is a tackling machine. The Broncos should be pushed in the AFC West this season.

The Baltimore Ravens have been consistent performers over the past decade or so and always seem to have a competitive roster. Joe Flacco returns at QB for the Ravens and at this point of his career it is clearly his team. The Ravens offense averaged 364.9 yards and 25.6 points per game. Justin Forset is the top option at running back for Baltimore while Steve Smith Sr. and draft pick Breshad Perriman are the primary receivers. Defense has been a trademark for the Ravens over the years and this year is no different but last season was a down year as Baltimore allowed 364.9 yards and 25.6 points per game. Terrell Suggs leads the Ravens pass rush and he is joined at LB by C.J. Moseley, Courtney Upshaw, and Daryl Smith while Lardarius Webb and Jimmy Smith are more than just capable corners. Judging by what we have seen over the years I have to believe the Ravens will be contenders once again.

This is simply a lot of points in game that looks to be one of those games where the last team with the ball wins so I will take the points with the Ravens.