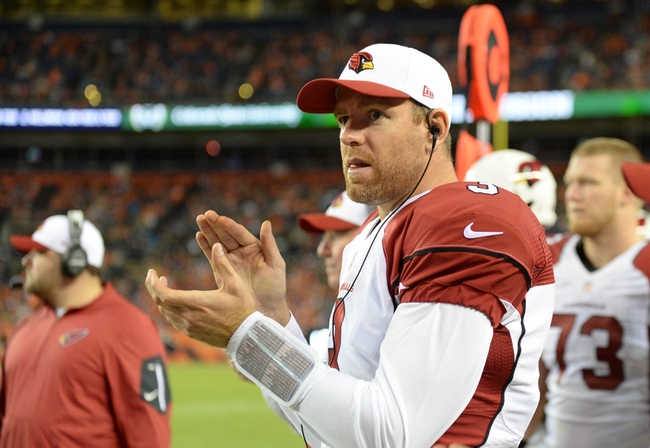 The New Orleans Saints and Arizona Cardinals meet Sunday afternoon at U of Phoenix Stadium.

The New Orleans Saints hope to get back to the playoffs after a tough 7-9 season last year. The Saints offense is still in good hands as long as Drew Brees is at quarterback, but there are less weapons overall with no Kenny Stills and Jimmy Graham to catch the ball. More will be expected from wide receivers Marques Colston and Brandin Cooks. The Saints did however upgrade their backfield with the addition of CJ Spiller, and he’ll split playing time with Mark Ingram. Defensively, the New Orleans Saints finished last season ranked 31st in total yards allowed and 28th in scoring defense. The Saints defense remains a big question mark again consider leading tackler Curtis Lofton and double-digit sack leader Junior Galette now play for different teams.

The Arizona Cardinals hope to get back to the playoffs after winning a combined 21 games their last two seasons. Carson Palmer returns at quarterback after throwing 35 touchdowns in his first two seasons with the Cardinals. A healthy duo of Larry Fitzgerald and Michael Floyd has great potential, and Arizona is hoping running back Andre Ellington can finally have that breakthrough season many have been expecting this season. Defensively, the Arizona Cardinals finished last season ranked 24th in total yards allowed and fifth in scoring defense. The Cards have one of the better secondary’s with Tyrann Mathieu and Patrick Peterson, while Calais Campbell comes back after racking up seven sacks. Wide receiver Floyd is questionable with a finger injury.

I think it's going to take some time for the Saints to adjust to all of the changes they made this offseason. I also hate backing the Saints on the road, as they're a different team outside of that dome. Give me the confident and talented Cardinals squad.