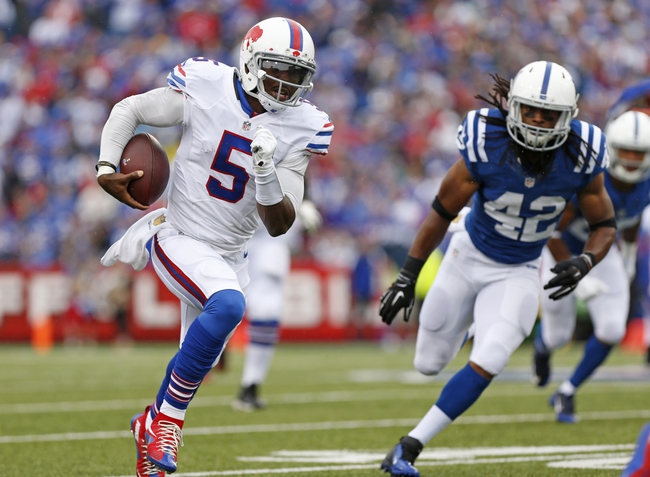 We had a pretty intriguing Week 1 matchup on the NFL schedule Sunday, with the Colts traveling up to Buffalo to kick off their 2015 season against the host Bills. Both of these teams are perceived to be improved this year, and should be fighting for playoff spots in the weeks to come. That said, the Bills seemed to be the more postseason ready team in this one.
Let’s check out some of the key stats and players so we can figure out why things went down the way they did. Afterward we’ll look forward to Week 2 to see what’s in store for both teams.

What Happened: The teams pushed back and forth for most of the first quarter to little avail on the scoreboard. The Colts’ Andrew Luck threw a long interception late in the quarter, which led to a beautiful 51-yard Tyrod Taylor touchdown pass to new Bill Percy Harvin as time ran out. At the end of one, it was 7-0 Buffalo.
In the second, it was all Bills as Dan Carpenter nailed a 41-yard field goal and Karlos Williams found pay dirt on a 26-yard touchdown run. Buffalo would go to the locker room up 17-0.
In the third, Anthony Dixon capped off a long drive with a one-yard rushing TD for a 24-0 edge. The Colts were finally able to stop the bleeding on a Donte Moncrief 2-yard TD pass from Luck.
Buffalo would add another Carpenter field goal in the fourth, and the Colts would score again on a 6-yard pass from Luck to Dwayne Allen.
When the dust settled, it was a 27-14 victory for the Bills in a very impressive game for them.

The Stars: Taylor showed why he earned the starting QB job this off-season with his play, finishing with 195 passing yards and 41 more on nine rush attempts. Percy Harvin would lead the way with 79 yards on five receptions.
The biggest stars here were on the Buffalo defense, however, as that unit stifled Luck all day, coming up with two picks and a fumble.

The Goats: The supposed offensive juggernaut of Indianapolis just wasn’t there today; they couldn’t finish off any drives or sustain much of a running game. Three backs combined for just 44 yards on the ground.
Buffalo isn’t totally blameless here, either. They racked up 11 penalties for 113 yards in all.

Injuries: Corey Graham of the Bills had to come out of the game on the very first play thanks to a head injury.
T.Y Hilton also suffered a left knee injury which needed attention on the sideline.

Outlook: Looking ahead to Week 2, the Bills will be starting their AFC East matchups with a home game against the incoming Patriots (Sunday, Sept. 20; 1:00 PM ET on CBS).
Meanwhile, the Colts get their first primetime game on Monday at home against the Jets (Monday, Sept. 21; 8:30 PM ET on ESPN).

The pick in this article is the opinion of the writer, not a Sports Chat Place site consensus.
Previous Pick
Top Ten Takeaways From NFL Kickoff: Patriots v. Steelers
Next Pick
Chargers vs. Lions - 9/13/15 NFL Pick, Odds, and Prediction