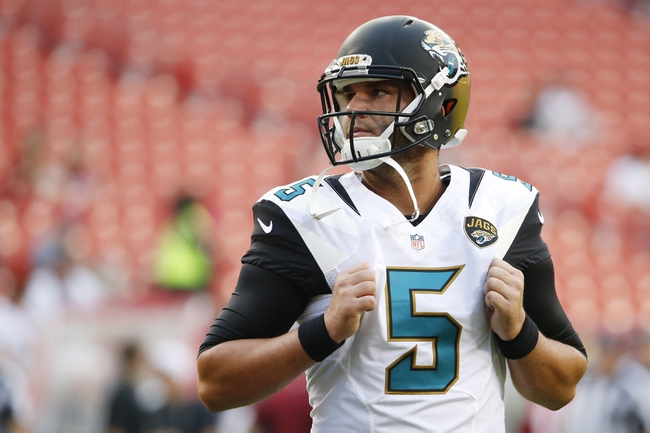 The Carolina Panthers look to continue in the right direction and make the playoffs for a third straight season. Pressure is on Cam Newton to take that next step in his career, but he’ll have to get the job done without star receiver Kelvin Benjamin. Carolina will now turn to Ted Ginn Jr., Greg Olsen and Corey Brown for production on the offensive side of the ball. It also wouldn’t hurt if the Panthers could get the 2009 version of running back Jonathan Stewart. Defensively, the Panthers ranked 10th last season in total yards allowed and 21st in scoring defense. Guys such as Luke Kuechly, Kony Ealy and Charles Johnson make sure the Carolina Panthers have a respectable defense. Josh Norman, Ryan Kalil, Charles Tillman and Star Lotulelei are questionable with injuries.

The Jacksonville Jaguars have combined for just nine wins their last three years, so anything positive is a step forward. The Jags will soon find out what Blake Bortles is made of in his second season, but it doesn’t help that tight end Julius Thomas is hurt. A young receiving core of Allen Robinson, Marqise Lee and Allen Hurns must grow up rather quickly. The same could be said for the Jaguars backfield made up of Denard Robinson and rookie T.J. Yeldon. Defensively, the Jaguars were ranked 26th last season in total yards allowed and 26th in scoring defense. Jared Odrick was a nice addition for Jacksonville, while Telvin Smith and Paul Posluszny provide toughness at linebacker. Sen'Derrick Marks and Toby Gerhart are both questionable with injuries.

The Jaguars are continue to be the Jaguars until their extremely young core grows up. The Panthers are one of the biggest question marks in the league, as it's hard to predict the season that Newton is going to have. Tough pick. However, when it's said and done, the Panthers are the better team with more direction. Give me the road team and the cheap chalk.