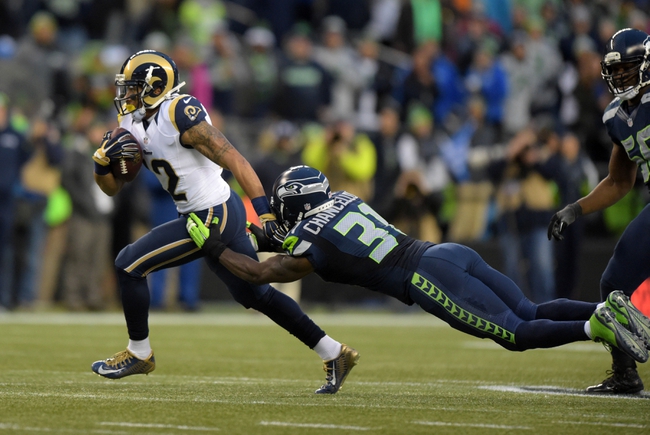 The Seahawks and Rams do battle in St. Louis on Sunday in one of the more intriguing week one matchups on the docket.

The Seattle Seahawks will have to have a short memory on the field when it comes to last year's Super Bowl debacle and while they have had all off season to stew in their what ifs they look poised to return to the top of the NFC once again this season. Seattle will be without Kam Chancellor for this one as he is currently in the midst of holding out for a contract extension and while his loss will be felt the Seahawks have a ton of weapons on both sides of the ball and should be able to stay out in front against the Rams. Russell Wilson is only getting better and Marshawn Lynch is one of the best backs in football and with Jimmy Graham now in the mix the Hawks offense could very well reach the level of their world class defense.

The Rams meanwhile always seem to play the Seahawks tough especially in St. Louis and with this being the season opener for both teams it would be a massive victory not only for their respective psyches but in the standings as well. St. Louis underwent some changes in the offseason but should still be a competitive team despite playing in a very tough NFC West and a strong showing on opening day against the two time defending NFC champions could be the boost needed for this franchise to get back to the “Greatest Show on Turf” days. St. Louis is an interesting team though as Nick Foles has a pretty small sample size when it comes to his NFL tenure and without a ton of weapons and strong offensive scheme that he had in Philly I'm not sold on him as the pivot for this group. A lot of people are on the Rams to cover here and perhaps win outright but I'm going the other way. Take Seattle.