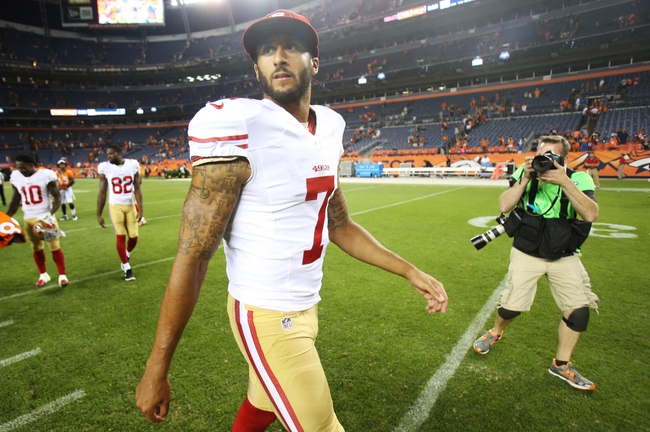 The Minnesota Vikings made strides last season with seven wins and hope to get to the playoffs for the first time since 2012. Teddy Bridgewater seems to be Minnesota’s franchise quarterback, and he has more weapons entering his second season. The Vikings added speedy wide receiver Mike Wallace to the mix and the return of running back Adrian Peterson doesn’t hurt matters. The Vikings finished last season ranked 20th in scoring defense, a number that should improve. Defensively, the Minnesota Vikings finished last season ranked 14th in total yards allowed and 11th in scoring defense. Players such as Everson Griffen, Robert Blanton and Harrison Smith give the Vikings a young but very dangerous defense. Center John Sullivan is questionable with a back injury.

The San Francisco 49ers had a brutal offseason and enter this season with a new coach in Jim Tomsula. The 49ers offense is about the only thing that looks familiar, as Colin Kaepernick is still at quarterback while Vernon Davis, Anquan Boldin and Torrey Smith hold things down at receiver. Carlos Hyde and Reggie Bush will have to take their game to another level with Frank Gore leaving for the Houston Texans. Defensively, the San Francisco 49ers finished last season ranked fifth in total yards allowed and 10th in scoring defense. NaVorro Bowman will have to hold down a 49ers defense that lost Chris Borland, Perrish Cox, Chris Culliver and Patrick Willis. Needless to say, the 49ers have to form a new identity after losing so much talent.

I hae no idea what to expect from the 49ers, as this team's offseason was such a mess and there's a ton of new players and a new coach. I know what we're getting with the Vikings, a young and talented team that's eager to prove itself. No better time than Monday night with the world watching, right?

Give me the road team.

The pick in this article is the opinion of the writer, not a Sports Chat Place site consensus.
Previous Pick
Falcons vs. Eagles - 9/14/15 NFL Pick, Odds, and Prediction
Next Pick
Index Of Free NFL Football Picks, Odds, TV Info For Week 1 2015: September 10 - September 14 2015