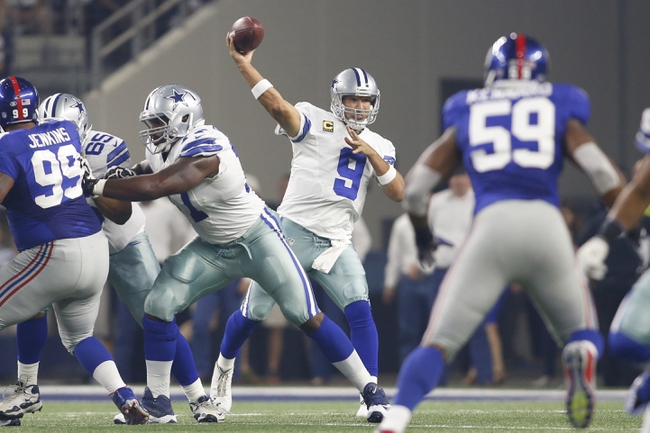 Kicking off the Week 1 schedule on “Sunday Night Football,” we had a pretty noteworthy NFC East matchup between the Giants and the Cowboys. Dallas had dominated the most recent games between these two teams, including a 3-point win in their last meeting. This one would be even closer than that.
Let’s check out some of the key stats and players in this one so we can figure out why things played out the way they did. Afterward we’ll check out what’s coming in Week 2 for each team.

What Happened: Things started out pretty slowly here, with Dan Bailey and Josh Brown trading field goals in the first quarter. Things picked up in the second, when Bailey kicked another field goal, and then the mistakes started coming for Dallas.
Dominique Rodgers-Cromartie scored on a 57 yard fumble return after Cole Beasley tried to gain some extra yardage on a reception. The Giants would score again after a Tony Romo interception, bagging a 40-yard Brown field goal.
After being dominated in time of possession and yardage, New York somehow had a lead 13-6 at halftime.
In the third, Brown bagged another field goal to extend the lead, and the Cowboys finally got into the end zone on a 2-yard Gavin Escobar reception from Romo.
The floodgates really opened in the fourth. Rashad Jennings got the Giants into the end zone with a short run, and Jason Witten answered with a short TD catch of his own. The Giants would have to settle for a field goal on their final drive, and the Cowboys were able to eke out a win on a 72-yard drive ending on an 11-yard Witten-Romo hookup.
The final score was 27-26 in a nail-biter for Dallas.
The Cowboys are now 8-0 in season openers against the Giants, but they’ve got a lot to work on before Week 2.

The Stars: Romo was great here, posting 356 yards on 36-of-45 passing for three touchdowns. He did have a couple of costly interceptions, though. Joseph Randle bagged 16 rush attempts for 65 yards along with another 42 in the air on three grabs. Witten and Lance Dunbar each had eight catches to lead the team in the absence of Bryant.
On the other side, Brown is the obvious standout, nailing all four of his field goals with a long of 50. He single-handedly kept the Giants in the game.

The Goats: Dallas dominated time of possession, especially early. They’d end up with a 37:10-22:50 edge but still had to come from behind to win. The turnovers (two picks and one fumble) were devastating, as the Giants were able to turn them into easy points.
There was also a question of bad clock management at the end of the game, as Eli Manning had the option to take a sack on third down before the Giants’ final field goal but instead tossed a clock-stopping incompletion--not to mention the fact that the team even called a passing play in that situation.

Injuries: This one will resonate across the entire first half of the season. All-Pro wide receiver Dez Bryant broke his right foot in the second half. He’s expected to miss 4-6 weeks while he recovers.