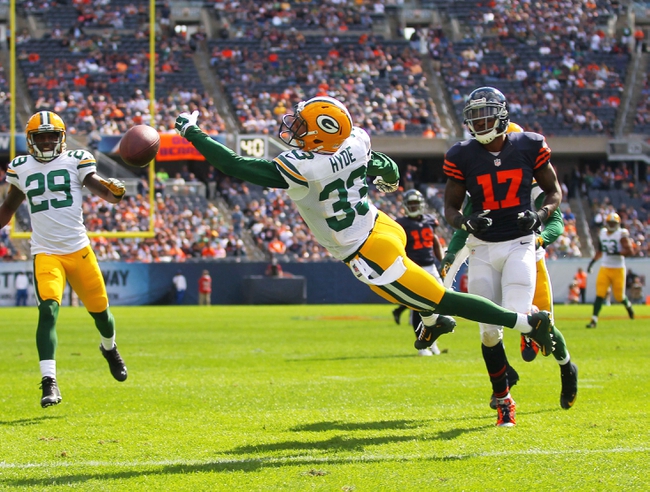 Which NFL Teams Should I Keep an Eye On After Week 1?

Week 1 of the 2015 NFL season is just about in the books. Great news for Chiefs and Cowboys fans, not so great news for Colts and Seahawks fans. This morning, we’re going to start a new Monday tradition and look at the top ten teams to watch from the previous weekend’s games. Sorry the MNF clubs will be left out, but that’s how the cookie crumbles.

1. The Green Bay Packers, even without Jordy Nelson, looked as good as we all anticipated yesterday afternoon in their 191st game against the Chicago Bears. QB Aaron Rodgers averaged 8.2 yards per passing attempt and targeted wideouts Davante Adams, Randall Cobb, and James Jones at least four times each. As long as the Pack can stay patient, they can go as far as they want to this year.

2. The Cincinnati Bengals played the Oakland Raiders yesterday. As one might expect, the Bengals won the match-up, which isn’t a particularly tough thing to do (especially when Raiders QB David Carr exits the game early with a concussion). The more important issue here is that QB Andy Dalton and TE Tyler Eifert combined for nine receptions, 104 yards, and two touchdowns. Eifert missed almost all of last season with an elbow injury. Having him back certainly looks like it could catapult Cincinnati into contention for the NFC North division title.

3. The Buffalo Bills made my Indianapolis Colts look rather like a high school team, particularly during the first half. Rex Ryan’s new club scored 24 points and shutout Indy before halftime. New starting QB Tyrod Taylor looked impressive in the air and on the ground; he had 41 rushing yards. That might be more than Trent Richardson had in his entire NFL career, come to think of it…

4. The Tennessee Titans won’t win Super Bowl 50, but they may have finally found their man at the QB position. Rookie Marcus Mariota looked absolutely incredible yesterday; he averaged 13.9 yards per passing attempt. Granted, the Titans were playing the Tampa Bay Buccaneers (Jameis Winston’s NFL debut left much to be desired), but if Mariota keeps this up, I’d say the Titans finally have their face-of-the-franchise.

5. The St. Louis Rams took on the Seattle Seahawks at Edward Jones Stadium yesterday afternoon. At first glance, the Seattle -4 line seemed absurd. “Surely,” one might think, “the Seahawks will win by at least a touchdown.” Then one might remember that QB Russell Wilson was 1-2 against the Rams heading into yesterday’s game (one might also remember that he lacks a solid offensive line). Now, Wilson is 1-3. Jeff Fisher’s Rams looked surprisingly good with QB Nick Foles under center. I’m definitely more intrigued than I expected to be.

6. The New England Patriots aren’t in the top five on today’s list because, really, did anyone actually expect them to implode? I know I didn’t. The Patriots looked typically solid against the Pittsburgh Steelers on Thursday night (we’re not even going to get into “headsetgate”). Personally, I want to see more of RB Dion Lewis, even after starter LeGarrette Blount returns in Week 2.

7. The Arizona Cardinals were facing a bit of an uncertain future this offseason with QB Carson Palmer (once again) injured. Yesterday, though, Palmer looked good-to-go against the New Orleans Saints. The veteran threw for 307 yards and three touchdown passes. As long as Palmer can stay healthy, the Cards stand a chance to go far. Oh, and pay attention to rookie RB David Johnson out of Northern Iowa. Color me impressed.

8. The San Diego Chargers looked, well, pretty horrible during the first half of their home game against the Detroit Lions yesterday afternoon. Then, Philip Rivers and Co. lodged a major comeback, scoring 30 points for the W after the half. Their most impressive player? TE Keenan Allen, who proved that his can handle the heat with starting TE Antonio Gates suspended.

9. Although the Dallas Cowboys won their big primetime game against their NFC East rival New York Giants, they did so by the skin of their teeth. QB Tony Romo led a 72-yard touchdown drive with just 1:34 left in the game, which was impressive, but also tinged with shades of seasons past. The Cowboys must stop relying on Romo to be the hero. Furthermore, the club lost star WR Dez Bryant to a broken foot last night, which could leave them in the lurch for the foreseeable future.

10. The Kansas City Chiefs laid the smack-down on the Houston Texans, at least for awhile. The Texans ultimately made a valiant comeback attempt, with a final score of 27-20. Still, it was great to see the Chiefs form some semblance of a passing offense (they hadn’t had a touchdown pass since 2013 heading into yesterday’s contest). TE Travis Kelce and WR Jeremy Maclin are leading the charge.