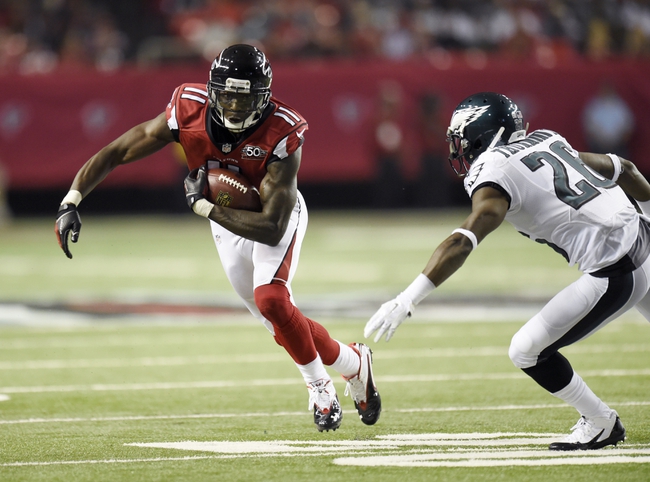 Kicking off our double-dose of NFL action on the Week 1 edition of “Monday Night Football,” we had a nice-looking NFC matchup between the Eagles and the Falcons in Atlanta. The Falcons had taken the last two meetings of these teams, with the most recent coming all the way back in 2012. They’d keep their streak going here.
Let’s check out some of the key players and statistics from this one so we can figure out why things played out the way they did. Afterward we’ll look ahead to Week 2 and see what’s in store for both teams.

What Happened: Scoreboard-wise, this one started out slowly. The only points in the first quarter belonged to the Falcons on a 41-yard Matt Bryant field goal.
In the second, the Falcons turned on the jets, posting two Julio Jones-Matt Ryan TD pass hookups, one from four yards and one from 22 out. These scores book-ended a pair of field goals from each side, making the tally 20-3 at halftime in favor of the Falcons.
In the third, the Eagles stormed back behind new QB Sam Bradford and new RB DeMarco Murray, who scored on an 8-yard run and a 5-yard TD pass.
Matt Bryant booted another field goal in the fourth to stave off the Philly attack, but the Eagles would take the lead on a 1-yard Ryan Mathews TD run. That was short-lived, however, as the Falcons would get the edge back on a 47-yard Bryant field goal.
Philadelphia would have a couple of chances to potentially win, but a missed field goal and a late interception sealed their fate. In the end, it was 26-24 Falcons.

The Stars: There were two big contributors here for the Falcons. One was Jones, who hauled in nine receptions for 141 yards and two touchdowns. Bryant was also perfect on the evening, logging four field goals and a pair of extra points.
On the other side, Darren Sproles outshined the rest of the RB corps, posting 50 rush yards on five attempts to lead the team, as well as seven receptions for 76 yards. Jordan Matthews also had 10 receptions for 102 yards.

The Goats: Cody Parkey will get a lot of blame here, whether he deserves it or not. The missed field goal in the fourth was costly, but in his defense his preparation was also rushed on the play. Bradford’s two interceptions certainly didn’t help, nor did the team’s complete inability to rush outside of Sproles.
Philly also posted 10 penalties for 88 yards and lost the time of possession battle 24:33 to 35:27.

Injuries: Both teams came out of this one pretty clean, but we should note that Bradford got some precautionary X-rays on his ankle after the game. He’s reportedly fine, and the tests came back negative.

Outlook: Looking ahead to Week 2, both teams will be back in action on Sunday, September 20. The Falcons will travel to New York to face the Giants (1:00 PM ET on FOX), while the Eagles will welcome the Cowboys to Philly (4:25 PM ET on FOX).