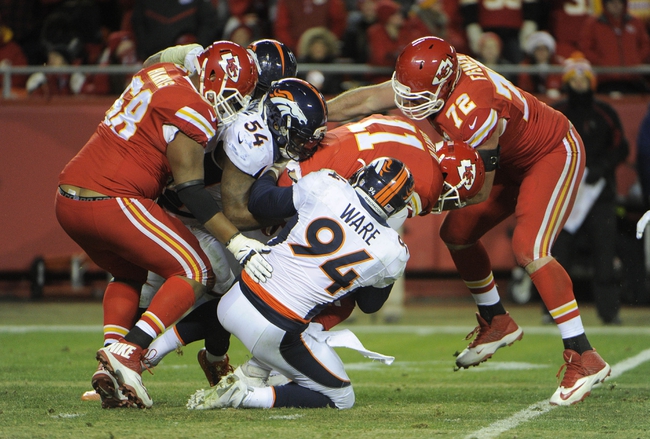 Which NFL Games Should You Watch This Week?

With Week 2 officially kicking-off tomorrow, this seemed like the perfect day to take a look at the top ten can’t miss games of the weekend. Maybe I’ll even make it a Wednesday tradition.

1. Broncos v. Chiefs (September 17 at 8:25 PM on NFLN) - The Chiefs are currently favored by 3 points in this AFC West battle that will take place at Arrowhead Stadium. Who doesn’t want to see if Gary Kubiak’s new Broncos offense can take home a W against their biggest division rival?

2. Patriots v. Bills (September 20 at 1:00 PM on CBS) - Rob Gronkowski and Co. head to his hometown to take on their AFC East division rival. For the first time in years, I think this could actually be a game. In fact, I like the Bills to take the division. Bold prediction time, y’all.

3. Seahawks v. Packers (September 20 at 8:30 PM on NBC) - An early season rematch of last year’s NFC title game will take place at Lambeau Field on Sunday night. I’m excited to see this one, especially if the Seahawks can get their offensive line together and put Jimmy Graham to good use.

4. Lions v. Vikings (September 20 at 1:00 PM on FOX) - Minnesota is currently favored by 3 in this NFC North match-up, but I like the Lions with the upset. The team is coming off of a heart-wrenching loss in San Diego, so I look for them to be out for blood. Should be a good one.

5. Cowboys v. Eaglesy (September 20 at 4:25 PM on FOX) - In Week 1, the Cowboys won a close one over the Giants and the Eagles lost a heartbreaker to the Falcons. I know I’m going to be tuning in for this NFC East showdown.

7. Jets v. Colts (September 21 at 8:30 PM on ESPN) - The Colts certainly didn’t look like a Super Bowl contender in Week 1, so I’m looking forward to being in the stands to see whether or not they can redeem themselves at Lucas Oil Stadium against a fairly formidable Jets defense. Leonard Williams, anyone?

8. Chargers v. Bengals (September 20 at 1:00 PM on CBS) - The Bolts and the Bengals are two under-the-radar teams that could be in playoff contention this year. I, for one, am interested to see how they look against each other, especially both coming off of big Week 1 wins.

9. Falcons v. Giants (September 20 at 1:00 PM on FOX) - The Falcons pulled-off a thrilling win over the Eagles last week and the Giants narrowly lost to the Cowboys, so look for a lot of emotion in the first game of the year at the Meadowlands.

10. Titans v. Browns (September 20 at 1:00 PM on CBS) - I know, I know. You can’t believe I’m including this as a “must see” game. Hear me out, though. The Browns’ defense is surprisingly good and Marcus Mariota is not-so-surprisingly good. I’m actually excited to see the two go up against one another.

The pick in this article is the opinion of the writer, not a Sports Chat Place site consensus.
Previous Pick
Top Ten Worst 2015 NFL Week 1 Injuries
Next Pick
Chiefs vs. Broncos - 9/17/15 NFL Pick, Odds, and Prediction