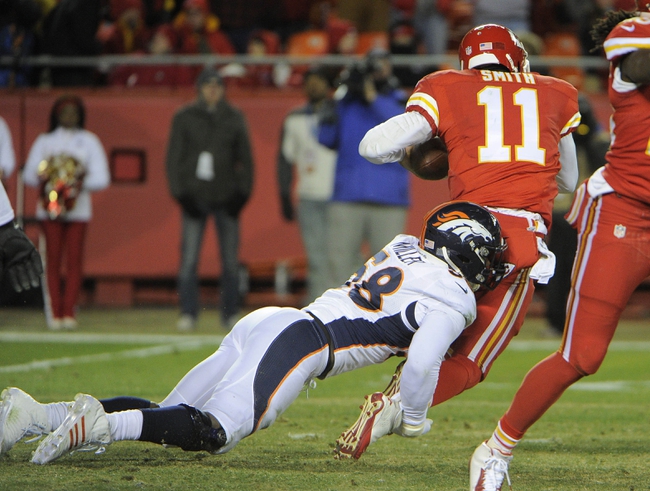 The Denver Broncos and Kansas City Chiefs square off Thursday at Arrowhead Stadium.

The Denver Broncos look for another big victory after beating the Baltimore Ravens opening week. Peyton Manning is completing 60 percent of his passes for 175 yards, zero touchdowns and one interception. Manning has two passing touchdown in his last three regular season games. Emmanuel Sanders and Demaryius Thomas have combined for 125 receiving yards and Jordan Norwood has two receptions. The Denver Broncos ground game is averaging 69 yards per contest, and Ronnie Hillman leads the way with 41 yards on 12 carries. Defensively, the Denver is allowing 13 points and 173 yards per game. Danny Trevathan leads the Broncos with nine tackles, Brandon Marshall has a sack and Aqib Talib has an interception. C.J. Anderson is questionable with a foot injury.

The Kansas City Chiefs look for another win after beating the Houston Texans on the road. Alex Smith is completing 66.7 percent of his passes for 243 yards, three touchdowns and zero interceptions. Smith has five touchdown passes in his last three games. Travis Kelce and Jeremy Maclin have combined for more than 150 receiving yards and two touchdowns while Albert Wilson has three receptions. The Kansas City Chiefs ground game is averaging 97 yards per contest, and Jamaal Charles leads the way with 57 yards on 16 carries. Defensively, Kansas City is allowing 20 points and 396 yards per game. Derrick Johnson leads the Chiefs with eight tackles, Allen Bailey has two sacks and Marcus Peters has an interception.

Denver has beaten Kansas City in each of the last six matchups. However, Peyton Manning looked flat out awful against Baltimore, and you have to start wondering if he's really going to be the same at 39 years old. Again, Peyton has only two touchdowns in his last three regular season games.

Not to panic over just one game, but we may be seeing a turn of the tide here. The Chiefs are well balanced on both sides of the ball and have their home crowd behind them. I like the home team and the tiny chalk.

The pick in this article is the opinion of the writer, not a Sports Chat Place site consensus.
Previous Pick
Top Ten 2015 Week 2 NFL Match-Ups
Next Pick
Denver Broncos at Kansas City Chiefs 9/17/15 NFL Score, Recap, News and Notes