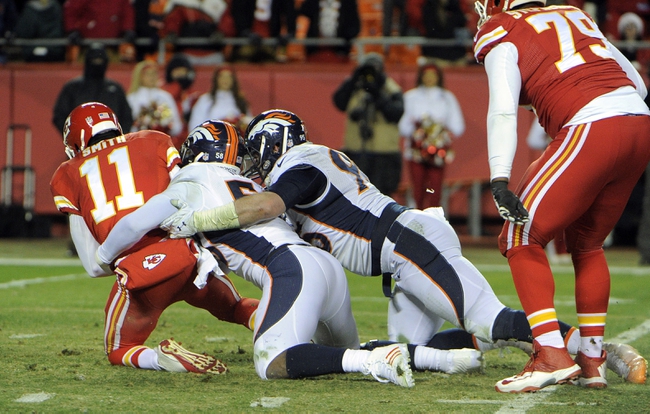 The Chiefs and Broncos meet up at Arrowhead on Thursday night as both teams look to move to 2-0 and take over the division lead.

The Denver Broncos eked out a win in their season opener at home against a very good Baltimore Ravens team and if not for a pick-six from Aqib Talib they could very well have finished last weekend with an 0-1 mark and staring at 0-2 on a short week. The Broncos have a ton of play makers in the skill positions on offense but it was their offensive line that struggled against a good Ravens front seven and as such it wasn't the best game statistically for any of the Broncos offensively and now on the road against a divisional foe it doesn't look like this is going to be pretty either. Denver HAS to get going with CJ Anderson if they want to win this game as KC's front seven is very strong as well and with the crowd noise in prime time all adding to the fold it is even more crucial for Denver that they get the run game going and allowing Peyton ample time to run the offense.

The Chiefs meanwhile put up one of the most impressive opening weekend victories as they waltzed into Houston and hammered the Texans and now return home to one of the loudest stadiums in the NFL for a date with their arch rivals. KC has the tools to do some damage this season as Jeremy Maclin brings a much needed dimension to the offense and with Travis Kelce catching passes as well and Jamaal Charles continuing to be one of the game's best players it makes things much easier for Alex Smith. Defensively, the Chiefs should give Denver a hard time much like the Ravens did and while we can expect a much better effort out of Manning, Anderson, Demaryius Thomas, and Emmanuel Sanders I am not sold on the offensive line keeping the Houston's in check and as such I think this game will come down to how well Alex Smith plays and on the big stage I think he shines once again.

The pick in this article is the opinion of the writer, not a Sports Chat Place site consensus.
Previous Pick
Top Ten 2015 Week 2 NFL Match-Ups
Next Pick
Denver Broncos at Kansas City Chiefs 9/17/15 NFL Score, Recap, News and Notes