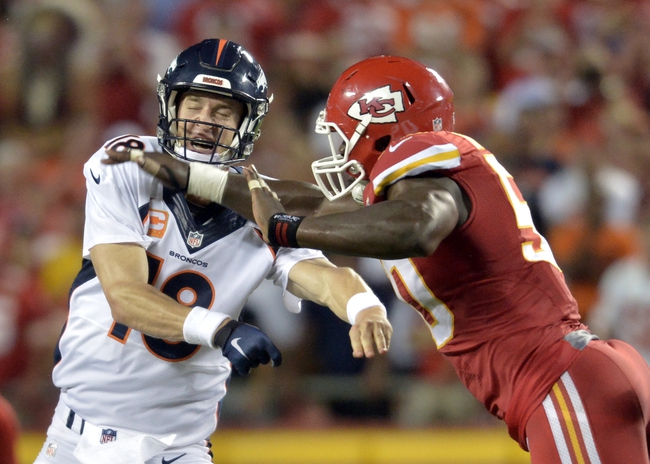 Kicking off the Week 2 festivities in the NFL on “Thursday Night Football,” we had a divisional matchup between the Broncos and the Chiefs. Denver came into this one fresh off an unimpressive victory over the Ravens, while Kansas City looked pretty good in a Week 1 matchup against the Texans. Games between the Broncos and Chiefs are always interesting, and this one was no different.
Let’s check out a few of the key stats and players from this one so we can figure out why things happened as they did. Afterward we’ll check out Week 3 and see what’s in store for both teams.

What Happened: Both teams shot themselves in the proverbial feet all game, giving the opposition a chance to capitalize. This began in the first quarter, and the scoring finally began in the second when a missed fourth down attempt and a slew of penalties by Denver led to a 34-yard Jamaal Charles TD run. A short time later, KC returned a Peyton Manning interception 55 yards for a defensive score and a 14-point lead.
The Broncos finally got it going late in the half, when Manning found Emmanuel Sanders 16 yards out for a TD and Virgil Green for a one-yarder a short time later. We were all tied up at 14 at the half.
In the third, the teams traded field goals for a relatively low-scoring period and a continued tie.
Things changed in the fourth, however, starting with Knile Davis’ 8-yard TD run which gave the lead back to the Chiefs. Manning found Sanders for another touchdown late in the quarter and the game seemed destined for overtime.
That all changed when Chiefs RB Jamaal Charles coughed up his second fumble of the game, and Denver scooped it up for the decisive score. We’d end up with a 31-24 victory for the visitors.

The Stars: Manning looked ugly early, but picked things up quite well. He’d finish with 256 yards, three scores and one interception. Demaryius Thomas (116 yards) and Sanders (87 yards; two TD) each had eight grabs.
The defense was really the star of the show here, however, as they forced three fumbles and two interceptions from a team that’s normally stringent about ball control.

The Goats: Even though he finished with 127 total yards, Charles will get the brunt of the blame here for his two fumbles. Smith wasn’t much better, however, as he’d finish 16-of-25 for just 191 yards and two picks.
This was a choppy game, especially early. Denver was flagged eight times for 85 yards, and KC got hit nine times for 60 yards.

Injuries: It seems as if both teams made it out of this one relatively cleanly, which is pretty surprising. They’ll each have a long week to recover.

Outlook: Strangely enough, each of these teams has another primetime game in Week 3--both on the road and against NFC North opponents. The Broncos will play Sunday night against the Lions in Detroit (September 27; 8:30 PM ET on NBC), while the Chiefs will head to Green Bay for the Packers on Monday (September 28; 8:30 PM ET on ESPN).

The pick in this article is the opinion of the writer, not a Sports Chat Place site consensus.
Previous Pick
Chiefs vs. Broncos - 9/17/15 NFL Pick, Odds, and Prediction
Next Pick
NFL News: Player News and Updates for 9/19/15