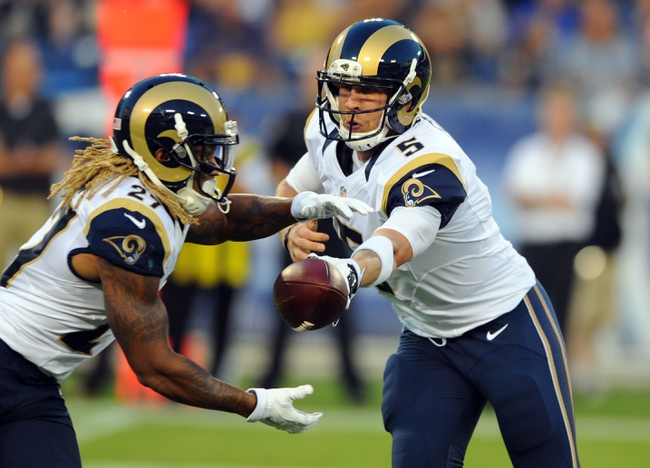 NFL Updates: News From Around the League, Week 2 Schedule and More

We’ve got just one more day to wait before Week 2 gets going for most of the NFL. There’s a lot to go over this morning, so let’s get right into our daily wrap-up while we’re waiting.

The Dolphins’ Cameron Wake is questionable for tomorrow’s game against in-state rival Jacksonville.
Wake has been limited in practice due to a hamstring issue.

The Rams have a pair of running backs questionable this week in Todd Gurley and Tre Mason. They were both full participants in practice all week, however.
The general feeling seems to be that Mason will play and Gurley won’t. The rookie Gurley is coming off a torn ACL and the team has been taking things with him very slowly so far.

The Redskins’ Jordan Reed has been tagged with a questionable designation this week, but for what it’s worth he says he’s certain he’ll play.
All of that said, Reed’s status is probably closer to a coin flip than anything else.

Buccaneers star receiver Mike Evans was out of action in Week 1, but there’s been some promise about his status for tomorrow.
Evans will probably be a game-time call this week due to his hamstring injury. He looked good in Friday’s practice, however so there’s quite a bit of hope here.

The Texans’ Arian Foster will be out of action for the Panthers game. He was able to get in a limited practice yesterday.
A groin issue has kept Foster out this season so far, but there’s a decent chance he could play in Week 3.

The Bills have a pretty sizable issue on their hands with RB LeSean McCoy. He was limited in practice yesterday due to his hamstring injury and is questionable for a huge Patriots game tomorrow.
We probably won’t find out whether or not McCoy will play until game time tomorrow. If he can’t go--which is a very real possibility--we’ll get a heavy dose of Karlos Williams.

The pick in this article is the opinion of the writer, not a Sports Chat Place site consensus.
Previous Pick
Denver Broncos at Kansas City Chiefs 9/17/15 NFL Score, Recap, News and Notes
Next Pick
NFL News: Player News and Updates for 9/20/15