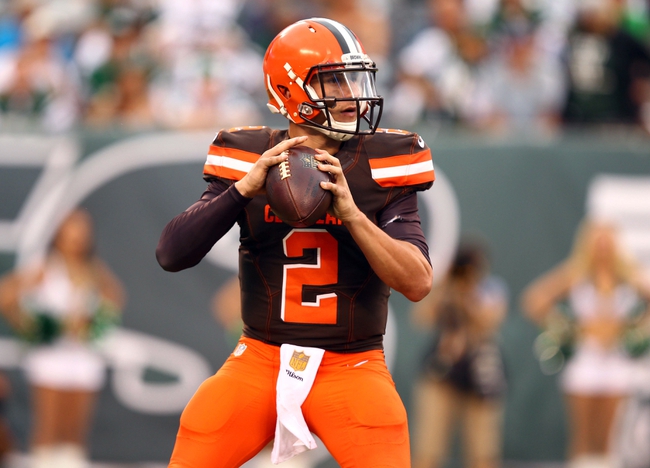 The Tennessee Titans look to build on their impressive road win over the Buccaneers. Marcus Mariota is completing 81.3 percent of his passes for 209 yards, four touchdowns and zero interceptions. Mariota is clearly off to an incredible start to his career. Kendall Wright and Delanie Walker have combined for more than 140 receiving yards and two touchdowns while Harry Douglas has two receptions. The Tennessee Titans ground game is averaging 124 yards per contest, and Bishop Sankey leads the way with 74 yards and a touchdown. Defensively, Tennessee is allowing 14 points and 273 yards per game. Zach Brown leads the Titans with seven tackles, Derrick Morgan has two sacks and Coty Sensabaugh has an interception. Delanie Walker is questionable with a hand injury.

The Cleveland Browns need a bounce back win after getting beat up by the Jets. Johnny Manziel is completing 54.2 percent of his passes for 182 yards, one touchdown and one interception. Josh McCown is questionable with a concussion. Travis Benjamin and Gary Barnidge have combined for more than 120 receiving yards and a touchdown while Andrew Hawkins has three receptions. The Cleveland Browns ground game is averaging 104 yards per contest, and Manziel leads the way with 35 yards on five carries. Defensively, Cleveland is allowing 31 points and 333 yards per game. Donte Whitner leads the Browns with 10 tackles, Tashaun Gipson has an interception and Karlos Dansby has a tackle for loss.

This is a tough game to cap given the QB situations. Manziel has a chance to shine in this league with his dual threat ability and brings life to the Browns. Also, while Mariota looked like Joe Montana in his opening game, let's be honest, he's not going to play like that every week.

With the Browns back at home, I look for their solid defense to get after it and find a way to pull out the victory.