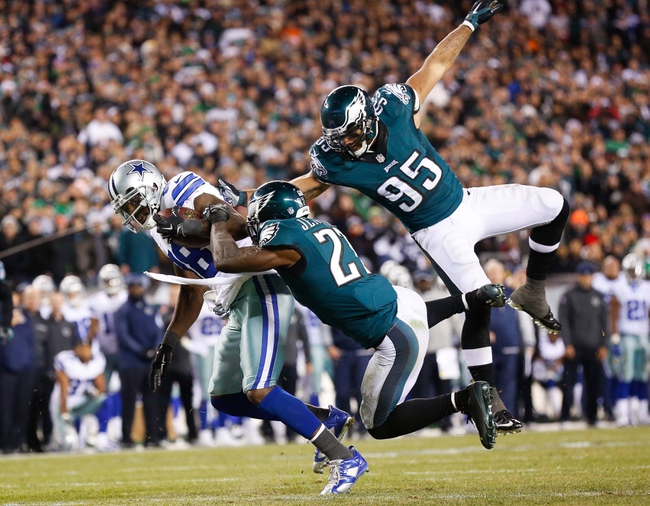 The Philadelphia Eagles and the Dallas Cowboys face off on Sunday in Philadelphia in a NFL matchup of NFC East rivals.

The Philadelphia Eagles were their own worst enemy as the bumbled their way to a loss in their opening game at Atlanta. The Eagles officially gamed 399 yards with 336 yards through the air but it was the 10 penalties that stifled the offense. It took Eagles QB Sam Bradford a half to get into sync but for the game he completed 69.2 percent of his passes for 336 yards with a touchdown and two interceptions. DeMarco Murray carried the ball just nine times for 11 yards in his Philly debut while Darren Sproles had five carries for 50 yards and seven catches for 76 yards while Jordan Mathews had 10 catches for 102 yards. The Eagles defense allowed 395 yards with 290 yards coming through the air as they couldn’t stop Julio Jones. Mychal Kendricks led the Eagles in tackles with 10, Byron Maxwell had nine, and Malcolm Jenkins had seven. The Eagles showed flashes of what many expected them to be but they also looked out of sync long enough to cost them the game.

The Dallas Cowboys stumbled for over 58 minutes against the Giants in their opening game but they overcame three turnovers to get the win in the final seconds. The Cowboys offense put up 436 yards with 356 coming through the air. Dallas QB Tony Romo completed 80 percent of his passes for 356 yards and three touchdowns and with two interceptions. Joseph Randle led the Cowboys running game with 65 yards as Jason Witten and Lance Dunbar each had eight catches and Dez Bryant was sidelined with an injury that will keep him out for several weeks. The Cowboys defense allowed 289 yards with just 190 coming through the air. Sean Lee led the Cowboys with nine tackles while Barry Church and Anthony Hitchens had eight tackles each. The Cowboys will need to get better in the turnover department as well as find a replacement for Dez Bryant and the massive amount of offense he generates.

I expect both of these teams to play better but this is too many points for a game that will be decided late so I will take points with the Cowboys.