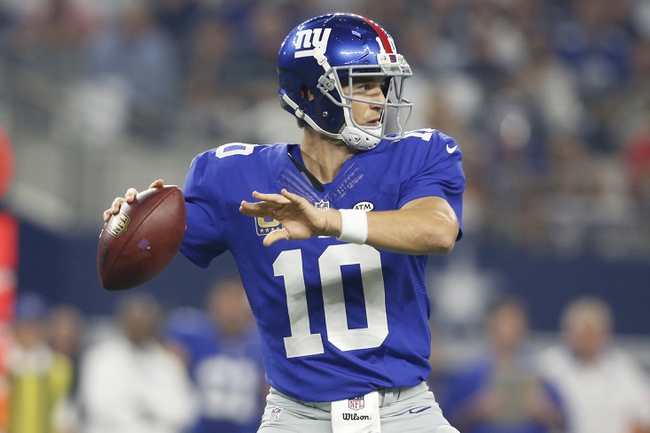 The Atlanta Falcons look to add to their impressive victory over the Philadelphia Eagles. Matt Ryan is completing 67.6 percent of his passes for 298 yards, two touchdowns and two interceptions. Ryan has a thrown a touchdown in 10 of his last 11 regular season games. Julio Jones and Roddy White have combined for more than 220 receiving yards and two touchdowns while Devonta Freeman has three receptions. The Atlanta Falcons ground game is averaging 105 yards per contest, and Tevin Coleman leads the way with 80 yards on 20 carries. Defensively, Atlanta is allowing 24 points and 399 yards per game. Paul Worrilow leads the Falcons with 13 tackles, Jonathan Babineaux has two tackles for loss and William Moore has an interception. Devin Hester is questionable with a toe injury.

The New York Giants look to rebound from their heartbreaking loss to the Dallas Cowboys. Eli Manning is completing 55.6 percent of his passes for 193 yards, zero touchdowns and zero interceptions. Manning hasn’t thrown a pick in four of his last six games. Shane Vereen and Odell Beckham Jr. have combined for 90 receiving yards while Daniel Fells has three receptions. The New York Giants ground game is averaging 99 yards per contest, and Rashad Jennings leads the way with 52 yards and one touchdown. Defensively, New York is allowing 27 points and 436 yards per game. Uani' Unga leads the Giants with 12 tackles, Trumaine McBride has an interception and Robert Ayers has a forced fumble. Jon Beason and Owamagbe Odighizuwa are questionable with injuries.

I expect the Giants to come out angry and focused after blowing a game to the Cowboys they pretty much had wrapped up. The Falcons are in a letdown spot after beating the Eagles, and they're no longer in the comfort of their dome.

I like the Giants to get the W here and kind of make up for what happened in their season opener.