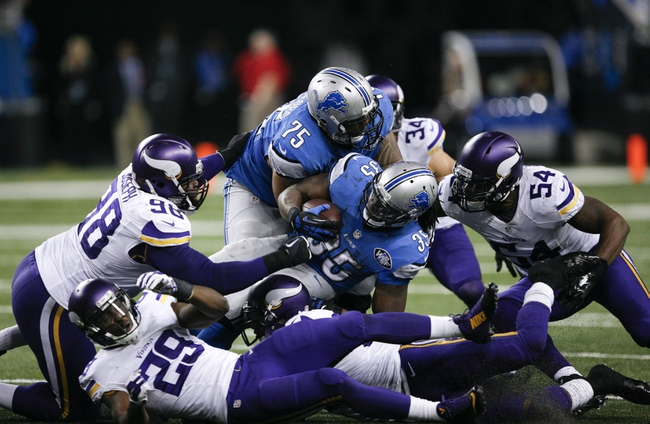 The Minnesota Vikings and the Detroit Lions face off on Sunday at TCF Bank Stadium in  a week two NFL battle of NFC North teams who lost in week one.

The Minnesota Vikings had no answers in their week one game at San Francisco as they were dominated in a loss to the 49ers. The Vikings offense gained just a total of 248 yards and scored a NFL low 3 points as they just looked confused at times. Minnesota QB Teddy Bridgewater completed 71.9 percent of his passes but it was all dinking and dunking and he had one ball intercepted but he was under pressure all night getting sacked five times. The Vikings running game was ineffective with Adrian Peterson rushing for just 31 yards and Mike Wallace led in receptions with six and Kyle Rudolph had five. The Vikings defense was gouged on the ground with 230 of the 390 yards they gave up coming via the run. Anthony Barr leads the Viking in tackles with 12, Harrison Smith has nine, and Gerald Hodges has eight. The Vikings should get the benefit of the home crowd they will have a short week of practice.

The Detroit Lions got off to a fast start in their week one game at San Diego but they couldn’t make it last as they lost to the Chargers. The Lions offense gained just 302 yards as it was the same issue we have seen from them in the past, just not enough of a running game. Lions QB Matthew Stafford completed 63.3 percent of his passes with two touchdowns but he also threw two interceptions. Detroit’s Ameer Abdullah rushed for 50 yards and a touchdown and he caught four passes and Eric Ebron and Golden Tate each has four catches and Calvin Johnson had two catches. The Lions defense was the worst in the NFL in week one allowing 483 yards and 33 points. Detroit’s leading tacklers were Rashean Mathis, Glover Quin, and Josh Bynes who each had eight tackles. The Lions clearly have a lotof work to do and back-to-back road games isn’t going to help matters.

The Vikings have the short week and the Lions have back-to-back road games but I look for them both to play better in this game and like most divisional games this one should be tight but I like the Vikings to get the win and the cover.