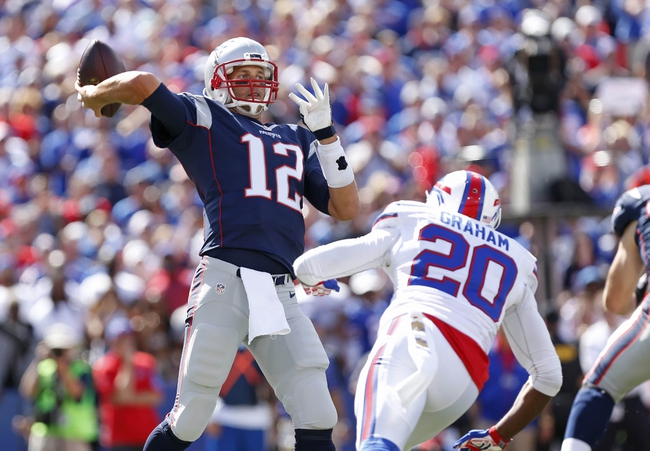 Sunday’s NFL action in Week 2 featured a great-looking matchup between two AFC East rivals, the Bills and Patriots. Buffalo was coming off an impressive opening-week win over the Colts, while New England crushed the Steelers in their first game. This matchup was critical for early divisional positioning and a great game to watch.
Let’s check out a few of the notable players and stats from this one so we can figure out why things played out the way they did. Afterward, we’ll visit the Week 3 games for both teams to see what’s up next.

What Happened: Buffalo came out strong in the first quarter, logging a lengthy drive which ended in a 2-yard touchdown run from Karlos Williams. The Pats would come right back, however, tying things up on an 8-yard TD hookup from Tom Brady to Julian Edelman. They’d take the lead on a 6-yard Dion Lewis TD run, and after one it was 14-7 Patriots.
New England kept the pressure on in the second, posting a 2-yard Rob Gronkowski TD pass from Brady. Buffalo couldn’t get much going on offense until a 9-yard pass TD from Tyrod Taylor to Charles Clay. Dan Carpenter would miss the extra point for a 21-13 tally. Stephen Gostkowski would extend the lead on a 46-yard field goal. That’s the way things would stay; it was 24-13 at the half.
In the third, Gostkowski would add another 21-yard field goal to keep the scoring going. Edelman and Brady then hooked up again for a 22-yard TD that made it 34-13. Gostkowski nailed another field goal from 50 yards to cap the Pats’ scoring in the third.
Taylor and Robert Woods gave the Bills some late life in the fourth on a TD hookup. The 2-point conversion would fail for a 19-37 tally. Taylor rushed in from seven yards out for a TD to give the Bills some late life. Another failed conversion kept it 37-25.
After a Brady fumble, Buffalo bagged a quick TD on another long pass from Taylor to Sammy Watkins. That made it a shocking 37-32 score with 4:16 to play. The Pats couldn’t end it with a touchdown, but were able to nail a field goal for an 8-point lead.
A Taylor interception on the next play would seal it at 40-32 Patriots.

The Stars: Brady deserves a lot of credit here; he had his offense clicking and was rifling the ball out so quickly the Buffalo D-line had no chance to reach him. He would finish with a whopping 466 yards and three scores.
Brady’s main beneficiaries were Edelman (11 receptions; 97 yards; two scores) and Gronkowski (seven receptions; 113 yards; TD).

The Goats: Buffalo shot themselves in the foot all day with some boneheaded personal fouls and penalties in general. They were hit with 14 for 140 total yards (and the Pats didn’t do much better on 11 for 119).
The Bills also couldn’t protect Taylor. Their O-line allowed eight sacks while their teammates on the Buffalo defense only got to Brady twice.

Injuries: Buffalo’s Aaron Williams suffered a scary-looking injury on the second Edelman touchdown. He was taken off the field in an ambulance. The nature of his injury wasn’t immediately evident.

Outlook: In Week 3, both teams will be back in action on Sunday, September 27. The Patriots will host the incoming Jaguars (1:00 PM ET on CBS) while the Bills will take their talents to South Beach and visit their division rival Dolphins (4:25 PM ET on CBS).

The pick in this article is the opinion of the writer, not a Sports Chat Place site consensus.
Previous Pick
NFL News: Player News and Updates for 9/19/15
Next Pick
Raiders vs. Ravens - 9/20/15 NFL Pick, Odds, and Prediction