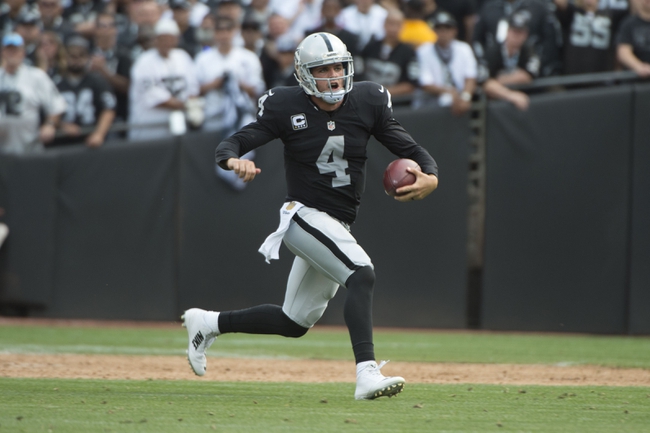 The Baltimore Ravens and Oakland Raiders square off Sunday at O.co Coliseum.

The Baltimore Ravens could use a win after losing their opener to the Denver Broncos. Joe Flacco is completing 56.3 percent of his passes for 117 yards, zero touchdowns and two interceptions. Flacco has four touchdown passes in his last three games. Marlon Brown and Crockett Gillmore have combined for 48 receiving yards while Kyle Juszczyk has four receptions. The Baltimore Ravens ground game is averaging 73 yards per contest, and Justin Forsett leads the way with 43 yards on 14 carries. Defensively, Baltimore is allowing 19 points and 219 yards per game. Jimmy Smith leads the Ravens with eight tackles, C.J. Mosley has two sacks and Will Hill has two tackles for loss. Eugene Monroe, Lorenzo Taliaferro, Rashaan Melvin and Timmy Jernigan are questionable.

The Oakland Raiders could also use a win after getting blown out by the Cincinnati Bengals. Matt McGloin is completing 74.2 percent of his passes for 142 yards, two touchdowns and one interception. Derek Carr is questionable with a hand injury. Amari Cooper and Michael Crabtree have combined for more than 80 receiving yards while Latavius Murray has seven receptions. The Oakland Raiders ground game is averaging 63 yards per contest, and Murray leads the way with 44 yards on 11 carries. Defensively, Oakland is allowing 33 points and 396 yards per game. Larry Asante leads the Raiders with eight tackles, Justin Tuck has two pass deflections and Khalil Mack has a tackle for loss. Benson Mayowa and Charles Woodson are questionable.

The Ravens are going to be eager to bounce back after losing a game they feel like they should have won. Meanwhile, the Raiders didn't show anything in the season opener to think they can hang in this matchup.

I'll take Baltimore to win by a touchdown.

The pick in this article is the opinion of the writer, not a Sports Chat Place site consensus.
Previous Pick
NFL News: Player News and Updates for 9/20/15
Next Pick
Eagles vs. Cowboys - 9/20/15 NFL Pick, Odds, and Prediction