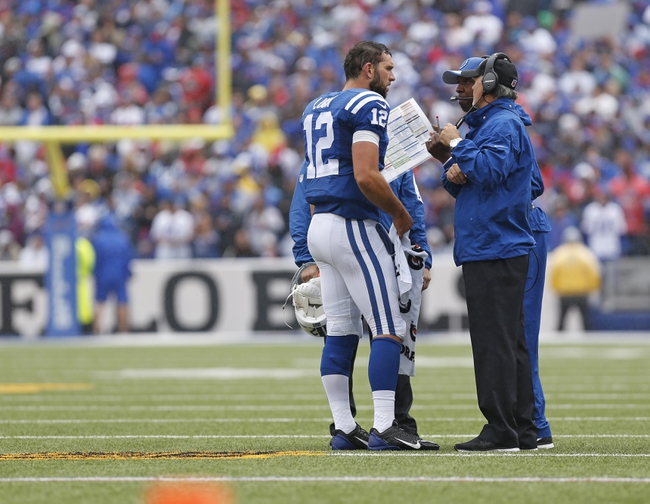 The New York Jets look to build off their impressive win over the Cleveland Browns. Ryan Fitzpatrick is completing 62.5 percent of his passes for 179 yards, two touchdowns and one interception. Fitzpatrick has eight touchdown passes in his last four games. Brandon Marshall and Chris Owusu have combined for more than 110 receiving yards and one touchdown while Eric Decker has two receptions. The New York Jets ground game is averaging 154 yards per contest, and Chris Ivory leads the way with 91 yards and two touchdowns. Defensively, New York is allowing 10 points and 321 yards per game. Calvin Pryor leads the Jets with 10 tackles, Marcus Williams has an interception and Brandon Marshall has two forced fumbles. Devin Smith, Oday Aboushi and Zac Stacy are questionable while Antonio Cromartie and Lorenzo Mauldin are doubtful.

The Indianapolis Colts could use a win after getting beat up by the Buffalo Bills. Andrew Luck is completing 53.1 percent of his passes for 243 yards, two touchdowns and two interceptions. Luck has four picks in his last three regular season games. T.Y. Hilton and Donte Moncrief have combined for more than 130 receiving yards and one touchdown while Andre Johnson has four receptions. The Indianapolis Colts ground game is averaging 64 yards per game, and Frank Gore leads the way with 31 yards on eight carries. Defensively, Indianapolis is allowing 27 points and 342 yards per game. D'Qwell Jackson leads the Colts with nine tackles, Henry Anderson has four tackles for loss and Darius Butler has a forced fumble. D'Joun Smith, Frank Gore, Greg Toler, Robert Mathis and Vick Ballard are questionable with injuries.

What's going on with the Colts? Luck looked horrible in Buffalo, and now he has some of his key players banged up, including Hilton who is going to miss time with a knee injury. That makes this a lot of chalk to eat.

However, I look at the Jets and don't see much on the offensive side of the ball, especially at quarterback. In the dome in Indy, I expect the real Luck to show up and for the Colts to win this easily.

The pick in this article is the opinion of the writer, not a Sports Chat Place site consensus.
Previous Pick
Bears vs. Cardinals - 9/20/15 NFL Pick, Odds, and Prediction
Next Pick
Index Of Free NFL Football Picks, Odds, TV Info For Week 2 2015: September 17 - September 21 2015