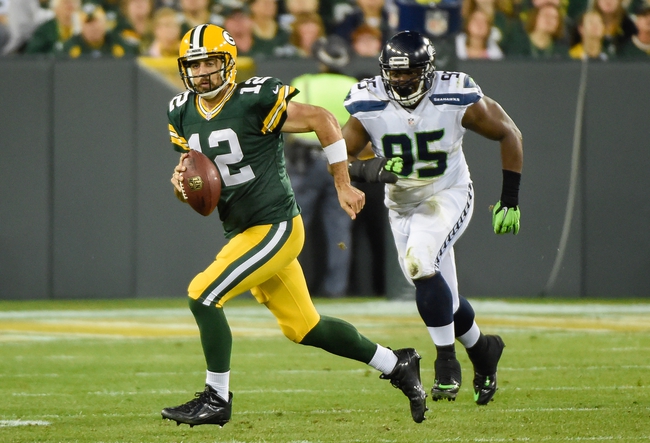 Finishing off the day’s NFL schedule on “Sunday Night Football,” we had a big matchup between two NFC powerhouses in the Seahawks and Packers. Seattle was just coming off a stunning overtime loss to the Rams in Week 1, while Green Bay took care of the Bears in their opener. This NFC Championship rematch would look quite a bit different than last time.
Let’s check out a few of the notable players and situations from this one so we can determine why things played out the way they did. Afterward we’ll look ahead to Week 3 and see what’s in store for both teams.

What Happened: Aaron Rodgers and the gang from Green Bay got things started early with a 29-yard TD pass to James Jones in the first quarter after a nice lengthy drive. Mason Crosby’s leg would make it 10-0 a short time later, and Seattle would answer with a Steven Hauschka 54-yarder for a 10-3 mark after the first.
In the second quarter, the only scoring came on an 18-yard Mason Crosby boot, as the offenses gave way to strength on defense.
After the break, the Seattle offense would come alive. They scored on a 5-yard Russell Wilson pass to Fred Jackson, and again on a 13-yard hookup to Doug Baldwin. Crosby would bag another 44-yarder to make it 17-16 Seattle after three.
In the fourth, Rodgers found the other Green Bay Rodgers (Richard) for a 5-yard TD. Crosby would cap off the scoring with a 21-yard boot and the Packers would get a little revenge on Seattle with a 27-17 win.

The Stars: Rodgers put up a nice game here, going 25-of-33 for 249 yards and two scores. He’d also rush six times for 23 more. James Starks filled in nicely for the injured Eddie Lacy, posting 95 yards on 20 carries. Randall Cobb led the way through the air with eight receptions for 116 yards.
Crosby was golden all night, going 4-4 on field goals with a long of 54.

The Goats: The Seahawks had a tough time establishing anything on the ground against that Packers front. Marshawn Lynch totaled just 41 yards on 15 carries, while Wilson led the way with 10 scampers of his own for 78 yards.
Jimmy Graham was once again nowhere to be found, as he came up with just one catch for 11 yards. Seattle apparently hasn’t realized yet that he’s a receiving tight end and not a blocker.

Injuries: There were quite a few notable injuries from this one. Probably the biggest was RB Eddie Lacy, who left in the first quarter with an ankle issue. Same thing with Davante Adams, who also took a trip to the locker room--he’d come back though.
Then there was Josh Boyd, whose condition looked quite a bit more severe. We’ll have to watch for updates out of Green Bay this week on those three.

Outlook: Looking ahead to Week 3, the Seahawks will be back in action on Sunday, September 27 for a home game against the Bears (4:25 PM ET on CBS).
Meanwhile, the Packers get another primetime game when the Chiefs come to town on Monday, September 28 (8:30 PM ET on ESPN).