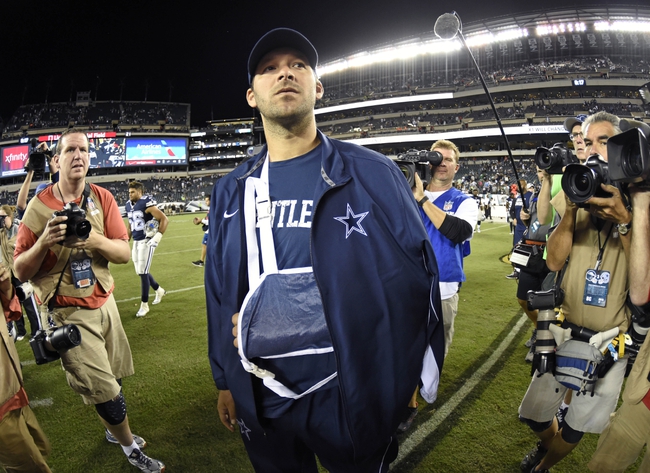 Which Week 3 NFL Injuries Should You Be Aware Of?

Week 2 is in the books, folks (and I’m about to crash after flying straight from Las Vegas to last night’s Monday Night Football debacle). But first, I’ll grace you with this week’s injury report. There were some impactful ones this week.

1. Dallas Cowboys QB Tony Romo suffered a broken again during Sunday’s game against the Philadelphia Eagles. Romo is expected to miss approximately eight weeks. Next man up. You hear that, Brandon Weeden?

2. Chicago Bears QB Jay Cutler left Sunday’s massive loss to the Arizona Cardinals with a hamstring injury and is expected to miss two to three weeks. Back-up Jimmy Clausen will take over for Da Bears.

3. Green Bay Packers RB Eddie Lacy exited Sunday’s win over the Seattle Seahawks with a right ankle issue. On the fortunate side, the Pack plays on Monday night next week and Lacy may be a go by then.

4. Atlanta Falcons RB Tevin Coleman left Sunday’s game against the New York Giants with a rib fracture. Coleman did not return. The official word is that he’ll be back on the field when he can “handle the pain”.

5. Philadelphia Eagles LB Kiko Alonso left Sunday’s NFC East Battle against the Dallas Cowboys with a partially torn ACL. Alonso already had the same knee repaired once before. The team is seeking a second doctor’s opinion, which will determine whether or not Alonso misses the entire season.

6. Indianapolis Colts CB Vontae Davis left Monday’s painful loss to the New York Jets with a concussion. Davis, who is an integral part of the team’s defense, will hopefully be able to pass the concussion protocol and return by Sunday, but there’s no guarantee.

7. Miami Dolphins RB Lamar Miller left Sunday’s game against the Jacksonville Jaguars with an ankle injury. While the issue initially looked like it could be serious, Miller says he’ll “be alright” and the team has not scheduled an MRI.

8. The Green Bay Packers were dropping like flies, with WR Davante Adams also sustaining an ankle injury on Sunday night. Adams returned to the game after his visit to the locker room, but was clearly struggling. No word yet on whether or not he’ll take the field Monday night.

9. In a seriously scary moment, Buffalo Bills S Aaron Williams was taken to the hospital in an ambulance following a neck injury in Sunday’s loss to the New England Patriots. Williams was released from the hospital later in the day, but is not expected to be active for Week 3.

10. After taking multiple hard hits in the first two weeks of the season, Detroit Lions QB Matt Stafford underwent x-rays yesterday. The team won’t say whether or not anything is broken, nor will they comment on Stafford’s status for Week 3. All I know is that something was very, very off with him against the Minnesota Vikings…

The pick in this article is the opinion of the writer, not a Sports Chat Place site consensus.
Previous Pick
New York Jets at Indianapolis Colts 9/21/15 NFL Score, Recap, News and Notes
Next Pick
Top Ten Most Surprising NFL Records (2015 Week 2 Edition)