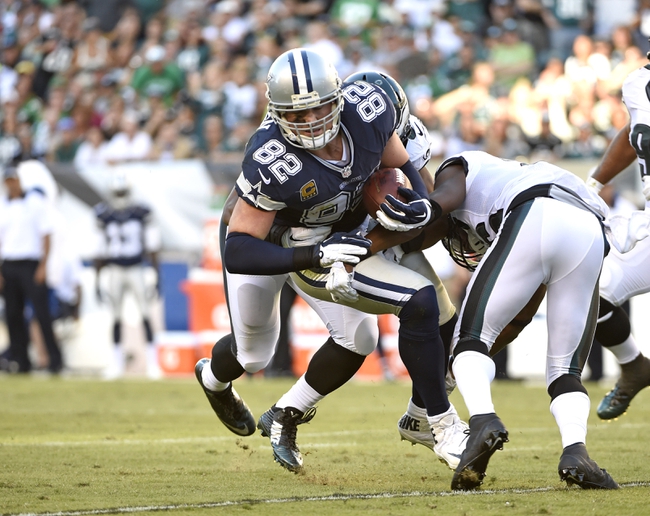 The NFL will get going on Week 3 tomorrow when the Redskins head to New York (or New Jersey, that is) to take on their division rival Giants. Before we get to that, let’s check out some of the notable players and situations out there in today’s news.

The Giants will likely be without WR Victor Cruz tomorrow, as he’s struggling to get over a calf injury.
The good news here is that Cruz is improving and running at full speed now, but this quick turnaround doesn’t give him much time to get healthy.

The Browns’ much talked-about QB situation will write itself another chapter today, as Josh McCown may be returning to practice.
McCown still has some hurdles to overcome in his recovery from a concussion, so we’ll likely get an update on his status as well as the QB situation today.

The Buccaneers’ Austin Seferian-Jenkins will be out of action for 4-6 weeks due to his shoulder strain.
Seferian-Jenkins posted a meager line in Week 2 after a breakout in the opener. This is definitely an unfortunate setback for him, as he’s had injury issues all over his brief NFL tenure.

The Eagles’ Riley Cooper was out of practice yesterday thanks to a calf strain. This puts him in doubt for this weekend’s matchup against New York.

The Cowboys put QB Tony Romo on short-term IR yesterday. He’s going to need a reported 8-10 weeks to get healthy from his broken collarbone.
The earliest Romo could return would be November 22 in Miami. In the meantime, Brandon Weeden will handle the snaps.

Speaking of the Cowboys, let’s look at Jason Witten. He’s currently dealing with two sprained knees and a sprained ankle, so it’s probably something of a toss-up that he’ll play this weekend.
That said, Witten has bounced back quickly from injuries before, and simply doesn’t miss games. He’s made 133 consecutive starts, the longest active streak among tight ends.

The pick in this article is the opinion of the writer, not a Sports Chat Place site consensus.
Previous Pick
New York Jets at Indianapolis Colts 9/21/15 NFL Score, Recap, News and Notes
Next Pick
Top Ten Most Surprising NFL Records (2015 Week 2 Edition)