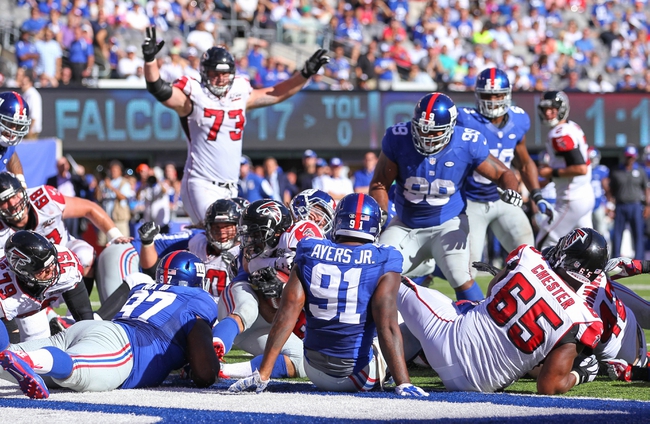 Which NFL Teams' Records Are the Most Surprising Right Now?

In the NFL, two weeks is a long time. We can learn a lot about who teams are going to be just a couple of weeks into the season. In this top ten, we’re going to take a look at the top ten most surprising records heading into Week 3.

1. New York Giants (0-2) - The New York Football Giants have managed to become the only team in the entire 96-year history of the NFL to lose two football games in a row after leading by at least 10 points going into the 4th quarter. I’ll repeat that. The only team in league history. Just let it sink in.

2. Indianapolis Colts (0-2) - At one point during the offseason, the Colts were favored to win Super Bowl 50. They’ve gone on to a winless start, culminating with a painful loss to the New York Jets during Monday Night Football at home. I’m going to try to give it another week or two before I start calling for Pep Hamilton’s head.

3. New York Jets (2-0) - On the flipside, the Jets have had a fantastic start to the year, starting 2-0 for the first time since 2011. Their defense, featuring Darrelle Revis and Leonard Williams, is nasty (in the best way) and I’m starting to think Todd Bowles might be just the guy to turn things around for J-E-T-S Nation.

4. Seattle Seahawks (0-2) - I’m pretty sure most fans (myself included) could have been knocked over with a wet noodle if you’d told them that both the Colts and the Seahawks would start the season with 0-2 records. Russell Wilson continued his habit of losing to the Rams in Week 1 and the club lost to a very good Green Bay Packers team on Sunday night in Week 2. Pete Carroll and Co. need to get it together if they want to contend, but I’m calling now that the Arizona Cardinals will win the NFC West.

5. Detroit Lions (0-2) - This past offseason, there was more than a little talk that the Lions could contend with the Pack for the NFC North title. Not if they keep playing like this. The team managed to blow a major lead against the San Diego Chargers in Week 1 and lost handily to the Minnesota Vikings on Sunday. Credit where credit’s due, though, QB Matt Stafford has proven to be one of the league’s toughest.

6. Baltimore Ravens (0-2) - Typically defensive juggernauts with a solid offense to boot, the Ravens haven’t looked up-to-par so far in 2015. After a tough loss to the Denver Broncos in Week 1, I have no doubt that Ravens fans everywhere are still reeling after Sunday’s loss to the Oakland Raiders.

7. Cleveland Browns (1-1) - The Browns lost badly to a Jets team that is proving itself to be quite good in Week 1, but they came back in Week 2 (with Johnny Manziel at QB, no less) to absolutely trounce the Tennessee Titans. WR Travis Benjamin was among the heroes of the day. Now to see if Mike Pettine sticks with Johnny Football even after the currently concussed Josh McCown is ready to roll again.

8. Cincinnati Bengals (2-0) - I’m not sure anyone expected Andy Dalton and his Bungles to be sitting alone atop the AFC North. Having TE Tyler Eifert back and healthy has make a big difference for the club. Now if they can just keep Pacman Jones from slamming any more opponents’ heads into the ground, they should be good to go.

9. Philadelphia Eagles (0-2) - I’d like to say “I told you so,” to Chip Kelly, but I’ll try to refrain. After completely shaking-up the offense in the offseason, things aren’t exactly going according to plan in Philly. After losses to both the Atlanta Falcons and the Dallas Cowboys, the team may need to spend a little time at the drawing board.

10. New Orleans Saints (0-2) - Even with the loss of TE Jimmy Graham (who is doing next to nothing so far in Seattle, just in case you hadn’t noticed), I didn’t think Drew Brees and his Saints would manage to lose to the Buccaneers on Sunday. Week 1’s loss to a Cardinals team that could contend for the Super Bowl is forgivable, but I anticipated a 1-1 record at this point.