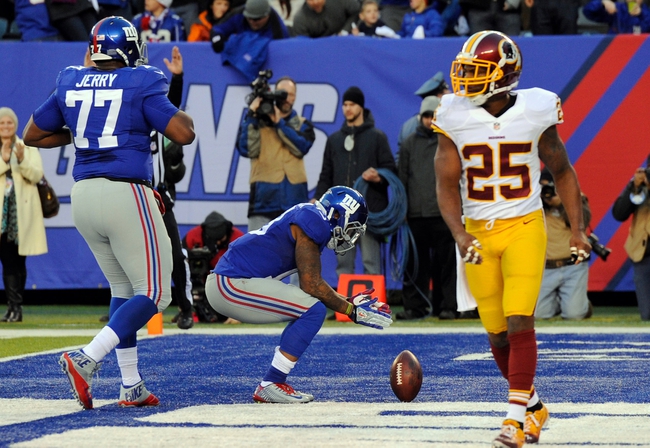 The Washington Redskins look to get a game above .500 with their first road win. Kirk Cousins is completing 75.9 percent of his passes for 399 yards, two touchdowns and two interceptions. Cousins has thrown a touchdown in seven of his last eight games. Jordan Reed and Pierre Garcon have combined for more than 240 receiving yards and two touchdowns while Ryan Grant has four receptions. The Washington Redskins ground game is averaging 171.5 yards per contest, and Alfred Morris leads the way with 180 yards on 43 carries. Defensively, Washington is allowing 13.5 points and 234.5 yards per game. Trenton Robinson leads the Redskins with 14 tackles, Preston Smith has three forced fumbles and DeAngelo Hall has a pass deflection. Perry Riley, Justin Rogers and Tom Compton are questionable with injuries.

The New York Giants are still looking for their first win after a brutal 0-2 start. Eli Manning is completing 61.8 percent of his passes for 485 yards, two touchdowns and zero interceptions. Manning hasn’t thrown a pick in four of his last five games. Odell Beckham Jr. and Shane Vereen have combined for more than 210 receiving yards and one touchdown while Larry Donnell has seven receptions. The New York Giants ground game is averaging 98 yards per contest, and Rashad Jennings leads the way with 64 yards and one touchdown. Defensively, New York is allowing 25.5 points and 419 yards per game. Uani' Unga leads the Giants with 17 tackles, Robert Ayers has a sack and Brandon Meriweather has three pass deflections. Dominique Rodgers-Cromartie, Ereck Flowers and Jon Beason are questionable with injuries.

The Giants are the first team in NFL history to lose the first two games of the season when having a fourth quarter lead of at least 10 points in both contests. Heads will roll if the Giants start the season 0-3, especially dropping a game to rival Washington.

I'm picking the New York Giants in a must-win game.

The pick in this article is the opinion of the writer, not a Sports Chat Place site consensus.
Previous Pick
Top Ten Most Surprising NFL Records (2015 Week 2 Edition)
Next Pick
Top Ten Toughest NFC Schedules in 2015