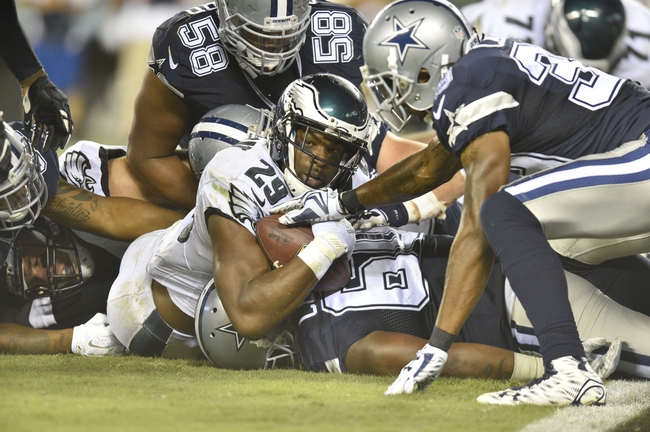 The NFL will be getting started this evening with the Redskins and the Giants on “Thursday Night Football.” Before we get settled in, let’s check out some of the headlines in our daily wrap-up.

The Jaguars’ running back situation got a little more interesting yesterday. Toby Gerhart was limited in practice. He’s been out the first couple of weeks due to an abdominal issue.
There doesn’t seem to be a whole lot of confidence in Gerhart’s health at the moment, so we’ll have to see what he looks like over the next couple of days. In a related situation, Denard Robinson didn’t practice yesterday (knee), so the team could be coming up incredibly thin at running back this weekend.

The Falcons’ Devin Hester was not able to practice yesterday. He’s still dealing with a toe injury.
The Falcons seem to be nursing Hester along right now, especially with Leonard Hankerson playing well in his absence.

Now let’s check out a couple of issues with the Dolphins. First off, the good news. QB Ryan Tannehill was able to put in a full practice yesterday. He’s getting over an ankle injury and appears to be headed for an active designation for Sunday against the Bills.

Then there’s Dolphins RB Lamar Miller, who was not able to practice yesterday. He’s also got an ankle injury.
That’s not good news for the Dolphins, obviously, so we’ll have to see if he can make a turnaround today and tomorrow.

The Eagles’ DeMarco Murray sustained a hamstring injury yesterday at practice, which continues a season of disappointing news and setbacks.
The team scheduled an MRI yesterday, so once we get some more information we’ll be able to determine how bad things are. As of now, he's questionable for the Jets this weekend.

The Panthers’ Jonathan Stewart had to sit out of practice yesterday. He’s dealing with a knee injury.
We’ll have to watch Stewart in practice today and tomorrow to see if he’s good to go or if there’s something more going on here.