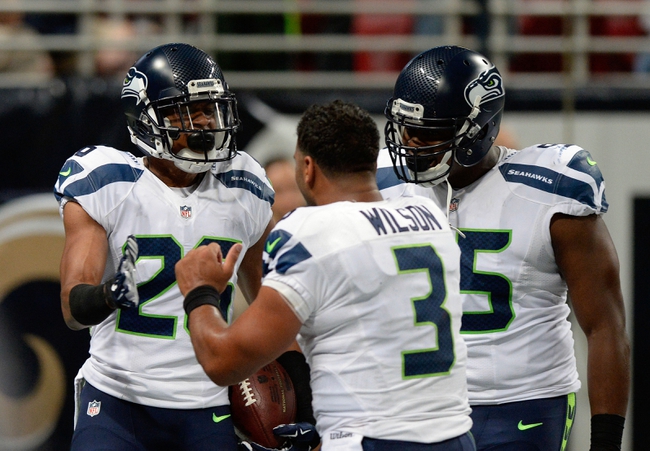 Everyone take a deep breath in. There were thousands across the board who were eliminated last weekend thanks in large part to the New Orleans Saints, the St. Louis Rams, The Miami Dolphins, and the Baltimore Ravens and now the field has trimmed consierably in the first big purge of the season. This is where things get interesting and those of you who were lucky enough to weather the storm last week have some pretty favourable matchups this week. Here we go with our Top Picks, Pool Breakers, and Pool Makers:

Oh, the Seattle Seahawks. Not too many would have predicted they would be 0-2 heading into their home opener but that is exactly the spot they find themselves in this week as they get a chacne to lay a beating on the hapless Chicago Bears. Seattle has dropped back to back road games against their division rivals from St. Louis (we won't talk about that) and then a prime time game against the Packers at Lambeau which is an incredibly tough start to the season and much like last year after a slow start the skeptics are starting to pile on Russell Wilson and the Hawks. However, the Hawks save their best for the 12's and with this being their home opener and an absolute must win the Seahawks would be a lock on a regular weekend in this context but things look even more favourable for them here. The Bears have been absolutely putrid on defense as the Cards just hung 48 on them last week and now they have to side with Jimmy Clausen thanks to a Jay Cutler hamstring injury. A back up quarterback, on the road in Seattle, against a frustrated group looking for their first win and they get their defensive leader back in Kam Chancellor. This is the pick this week. Lock it in and move on.

The Patriots return home after an emotional win on the road against the Buffalo Bills who by kick off were actually favoured in the game, and now they get the Jacksonville Jaguars fresh off their upset win over Miami. The Pats demonstarted once again why they are the reigning Super Bowl champions and Tom Brady's season of terror continued against one of the league's best defenses in hostile territory and now they return back home against one of the league's perennial bottom feeders. The Pats have sometimes flopped in these circumstances and it may not be the best idea to lay the two-touchdown line here against a Jags team who has looked decent through two weeks but I can't see Blake Bortles and the crew having enough in the tank to make it back to back upsets over the AFC East. New England is a pretty safe pick.

If for some reason you have already used the Patriots and Seahawks in the first two weeks then turn to the Denver Broncos. Denver needed a Jamaal Charles fumble on the final drive of the game to move to 2-0 but with the way things were going it looked like a Denver win was inevitable and KC just made it happen that much quicker, and now the Broncos have a chance to move to 3-0 with a road win against the Lions. The Broncos had been criticized for their lack of execution through the first six quarters of the season but Peyton Manning and the Denver offense awoke in a very big way against a good Chiefs defense and now they can continue the onslaught against a Lions team who has been very bad through two weeks. Detroit is at home in this one and that accounts for why the line is so low here but with Denver's defense being one of the league's best and the Lions struggling in all facets of the game right now this one looks like as good as any on the board on Sunday and if you need another game to look at it this should be it.

It should come as no surprise that an AFC North divisional show down appears in this section as these games are always a blood bath and this one should be no different. The reason why I include it though is the inclination some might have to fade the Baltimore Ravens thanks to their loss to the Raiders last weekend and the fact they will be without Terrell Suggs for the season but the Ravens are still favoured in this game and that should indicate how close this game should be. Cincy is a very good football team and one of the best in the AFC but they have yet to face a defense of Baltimore's caliber and with the uncertainty around the starting running back for the Bengals I think this game is better left untouched. The Ravens are reeling after last week and will be looking for a spark at home and while I am not positive they get the win I do think it will be close and that neither of these teams are viable survivor picks this week.

The second trap game leads us to New York where the undefeated Jets take on the winless Philadelphia Eagles in a game that should be very exciting with a contrast of different styles. The Jets pulled off an impressive road win in Indianapolis on Monday night and left some readers in tears thanks to their departure from their survivor pools but if you read our picks last week you would have known to stay away from that one. We are on the other side of the coin this time around as the Jets are favoured by a field goal at home against the once feared Philadelphia Eagles who are having a ton of trouble getting anything going this season. However, the Eagles are still a very good team with a lot of options to work with and while the Jets defense should have their way as usual I think the Eagles can generate some buzz with the ground game early and allow Bradford to sling some passes down field. I do think the Jets ultimately get the win here but the confidence meter isn't moving too quickly and instead I'd recommend sitting this one out.

It is tough to consider this one a pool maker due to the talent level of the Steelers but as a road team heading into St. Louis they qualify here as the spread is quite favourable. Pittsburgh will have more favourable matchups but they also have a ton more where they shouldn't be relied on for a victory and those are six remaining divisional games against the Ravens, Bengals, and yes even the Browns. St. Louis was a trendy dark horse pick last week by some as they went into Washington looking to follow up their statement win against the Seahawks but in traditional Rams fashion they laid an egg against one of the league's worst teams. Pittsburgh is in a good spot here as they should move the ball well and they get Le'Veon Bell back who is a work horse on the ground and with him being another option for Ben Roethlisberger to work with I think it gives Antonio Brown even more value. Pittsburgh should win without trouble.