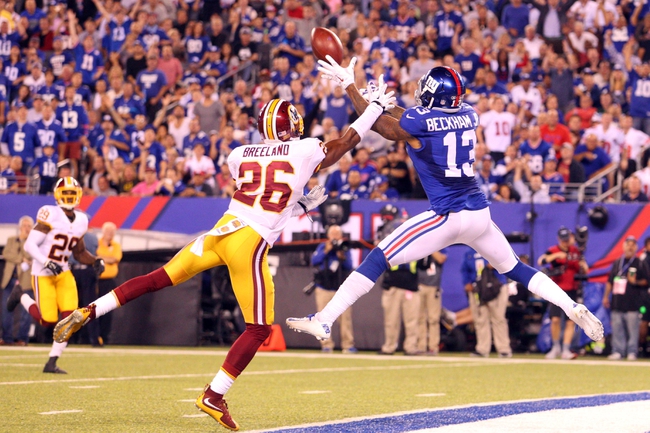 Which NFL Wideouts Have Had the Most Yards Their Rookie Seasons?

During last night’s win over the Washington Redskins, New York Giants WR Odell Beckham Jr. became the NFL player with the most receptions (and the most fantasy points, lest we forget) in his first 15 games. In honor of this, I thought we’d take a look at some all-time rookie receiving stats this morning. Below, you’ll find a rundown of the top ten most single-season rookie receiving yards in NFL history.

1. Houston Oilers WR Bill Groman, who played his rookie season in the AFL in 1960, leads today’s list with 1,473 first-year receiving yards. Groman retired in 1966, four years before the NFL was officially formed. Nonetheless, his rookie campaign remains the best off all time and his record has stood for more than 50 years.

2. During the 2003 NFL season, the Arizona Cardinals started rookie WR Anquan Boldin. Boldin, who had the middling duo of Jeff Blake and Josh McCown under center, still managed to get 1,377 receiving yards during his first season. As we all know, Boldin’s talent has not waned. He racked-up 1,062 yards just last year with the San Francisco 49ers.

3. When wideout Randy Moss debuted for the Minnesota Vikings in 1998, he made an immediate impact, clocking 1,313 receiving yards. Moss went on to have an incredible career, ranking third all-time in receiving yards, and may very well one day find himself in the Hall of Fame.

4. The man of the hour, New York Giants WR Odell Beckham Jr ranks fourth on today’s list, with 1,305 yards during his 2014 rookie campaign. As long as OBJ can stay healthy, he looks to be on-track to remain one of the league’s premiere wideouts for many seasons to come.

5. Tampa Bay Buccaneers WR Michael Clayton had a standout rookie season in 2004. Clayton racked-up 1,193 yards. Unfortunately for both the team and the fans, his first year was the only one during which Clayton played all 16 games, sending him into a sharp downward spiral.

6. In 1996, when Drew Bledsoe was still quarterbacking the New England Patriots, a wideout named Terry Glenn stepped onto the scene. The duo combined for 1,132 yards during Glenn’s rookie year, making him one of the top receivers in Pats history.

7. During the 1986 NFL season, WR Bill Brooks debuted for the Indianapolis Colts. Brooks had 1,131 receiving yards throughout his rookie campaign. Though he never went on to have another season as exceptional as his first, Brooks’s rookie stats remain impressive.

8. Also in 1986, the now-defunct Houston Oilers drafted 5’9 WR Ernest Givins. Despite his stature, Givins had 1,062 receiving yards during his rookie season. Givins went on to be a two-time Pro Bowler.

10. Tampa Bay Buccaneers WR Mike Evans didn’t have a lot to work with at QB his rookie year in 2014. Despite Mike Glennon and Josh McCown being under center for the team, Evans racked-up 1,051 receiving yards.

The pick in this article is the opinion of the writer, not a Sports Chat Place site consensus.
Previous Pick
Cleveland Browns at Indianapolis Colts - 9/24/17 NFL Pick, Odds, and Prediction
Next Pick
NFL News: Player News and Updates for 9/27/15