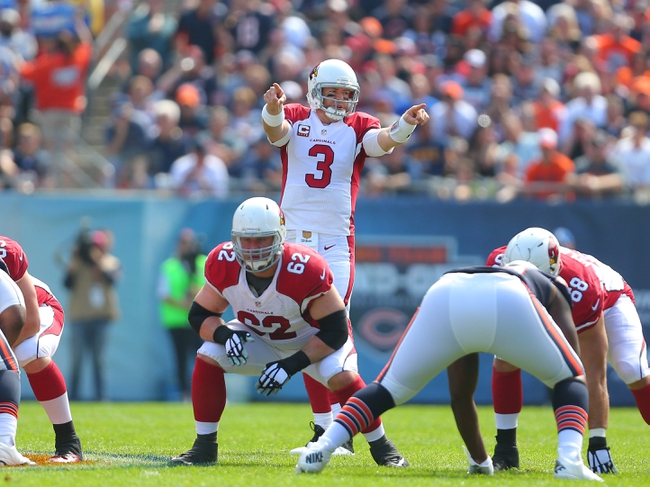 The San Francisco 49ers and Arizona Cardinals square off Sunday at U of Phoenix Stadium.

The San Francisco 49ers look to get a game above .500 with their first road win of the year. Colin Kaepernick is completing 69.4 percent of his passes for 500 yards, two touchdowns and zero interceptions. Kaepernick hasn’t thrown a pick in five straight games. Torrey Smith and Vernon Davis have combined for 240 receiving yards and one touchdown while Anquan Boldin has 10 receptions. The San Francisco 49ers ground game is averaging 170.5 yards per contest, and Carlos Hyde leads the way with 211 yards and two touchdowns. Defensively, San Fran is allowing 23 points and 350.5 yards per game. Antoine Bethea leads the 49ers with 12 tackles, Tramaine Brock has an interception and NaVorro Bowman has a sack. Vance McDonald, Bruce Ellington and Reggie Bush are questionable with injuries.

The Arizona Cardinals look to remain unbeaten after a nice 2-0 start. Carson Palmer is completing 64.3 percent of his passes for 492 yards, seven touchdowns and one interception. Palmer has 10 touchdown passes in his last four games. Larry Fitzgerald and John Brown have combined for 290 receiving yards and four touchdowns while Darren Fells has four receptions. The Arizona Cardinals ground game is averaging 117.5 yards per contest, and Chris Johnson leads the way with 109 yards on 30 carries. Defensively, Arizona is allowing 21 points on 371.5 yards per game. Tony Jefferson leads the Cardinals with 14 tackles, Alex Okafor has two sacks and Rashad Johnson has an interception. LaMarr Woodley is questionable with a shoulder injury.

The 49ers are still banged up and still have more to prove, especially after getting blown out last week against the Pittsburgh Steelers. Meanwhile, the Cardinals are clicking out of the gate, especially Palmer who likes like he plays for the Bengals. This Arizona team is dangerous.

I'll take the Cards by a touchdown here.

The pick in this article is the opinion of the writer, not a Sports Chat Place site consensus.
Previous Pick
NFL News: Player News and Updates for 9/27/15
Next Pick
Seahawks vs. Bears - 9/27/15 NFL Pick, Odds, and Prediction