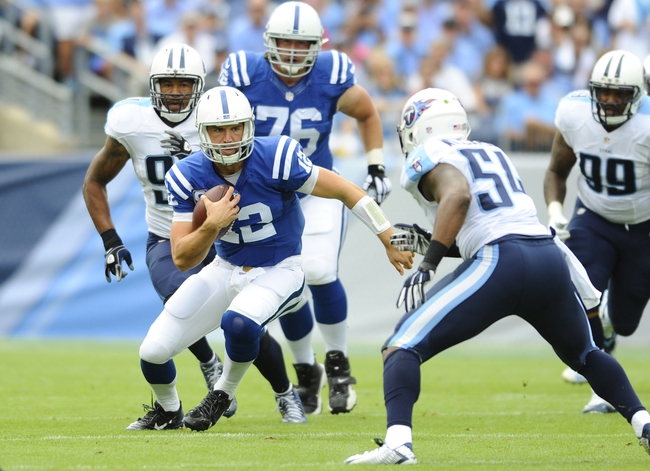 Mixed in with the Week 3 NFL Sunday schedule, we had an AFC South divisional matchup between the Colts and the Titans. Indianapolis was coming off a Monday night loss to the Jets, while the Titans fell to the Browns in Week 2. The Colts desperately needed this game to keep their early-season morale intact. They got it, but the result was in question for the vast majority of the game.
Let’s check out some of the notable players and stats from today so we can see why things played out the way they did. Afterward we’ll check out Week 4 and see what’s in store for both teams.

What Happened: In the first quarter, the Colts got some badly-needed support from their running game and defense. Their first score came on a 1-yard Frank Gore TD. That was the only score of the quarter, and after one Indy was up 7-0.
In the second, the defense came through on a 69-yard pick-6 from Dwight Lowery off a Marcus Mariota pass. The Titans would get on the board on a 38-yard Ryan Succop field goal, and they’d close the gap even further as Mariota hooked up with Kendall Wright for a 7-yard score. Adam Vinatieri would try to close out the half on a 61-yard field goal attempt, but a false start soured the play. After two, it was 14-10 Colts.
In the third, the Titans put together a nice drive (overcoming penalties to do so), ending with an Antonio Andrews TD run from eight yards out. An interception by Perrish Cox set the Titans up at the 3-yard line, and Mariota found Dorial Green-Beckham for the TD. That made it 24-14 Titans. Succop would add another field goal for a 27-14 edge.
In the fourth, the Colts closed the gap on Andrew Luck’s 35-yard TD pass to Phillip Dorsett. Another Lowery pick would set Indianapolis up at the Titans’ 11. On the next play, Luck hooked up with Donte Moncrief for a TD pass, making it 28-27.
When the Colts got the ball back, they capped off a drive with a 6-yard TD run from Gore. The Seahawks were able to respond with a lengthy drive of their own and a 1-yard TD from Jalston Fowler. The 2-point conversion failed, and the Colts eked out their first win of the year, keeping their streak against divisional opponents intact 35-33.

The Stars: It wasn’t pretty, but the Colts offense finally got the result they wanted. Luck would finish with 260 yards, two touchdowns and two picks. T.Y. Hilton caught four balls for 94 yards.
Behind Luck was a pretty decent running game, led by Gore’s 86 yards on 14 attempts (and two touchdowns).
On the other side, Mariota played well with 367 yards and two scores, but his two picks hurt quite a bit. Wright was the leading receiver with 95 yards and a TD on seven grabs.

The Goats: This was a sloppy game. Four turnovers and 17 combined penalties meant each team shot itself in the proverbial foot several times. The time of possession battle here was out of whack early, but stabilized a bit to a 34:59-25:01 edge for the Titans.
This game could easily have gone either way, so no one should really be proud.

Injuries: The Titans’ Taylor Lewan went down early in the third quarter and had to come out of the game.
The Colts secondary came into this one severely beat up, but the return of Vontae Davis (concussion) buoyed their defense just enough.

Outlook: Looking ahead to Week 4, the Colts will be at home for another divisional matchup against the Jaguars on Sunday, October 4 at 1:00 PM ET on CBS.
The Titans, meanwhile, will get the week off with a bye.

The pick in this article is the opinion of the writer, not a Sports Chat Place site consensus.
Previous Pick
Top Ten All-Time NFL Rookie Receiving Yards Leaders
Next Pick
Cardinals vs. 49ers - 9/27/15 NFL Pick, Odds, and Prediction