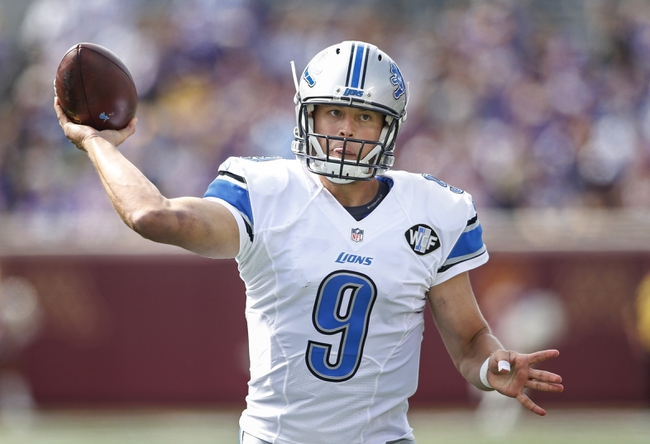 The Denver Broncos look to remain hot after an impressive 2-0 start. Peyton Manning is completing 58.8 percent of his passe for 431 yards, three touchdowns and two interceptions. Manning has six interceptions in his last four games. Demaryius Thomas and Emmanuel Sanders have combined for 328 receiving yards and two touchdowns while Jordan Norwood has five receptions. The Denver Broncos ground game is averaging 65 yards per contest, and Ronnie Hillman leads the way with 75 yards on 21 carries. Defensively, Denver is allowing 18.5 points and 243.5 yards per game. Danny Trevathan leads the Broncos with 16 tackles, DeMarcus Ware has two sacks and Aqib Talib has four pass deflections. Kenny Anunike, Omar Bolden and Lerentee McCray are questionable.

The Detroit Lions look for their first season victory when play their home opener. Matthew Stafford is completing 61.4 percent of his passes for 532 yards, four touchdowns and three interceptions. Stafford is questionable with a ribs injury. Calvin Johnson and Golden Tate have combined for 226 receiving yards and one touchdown while Eric Ebron has nine receptions. The Detroit Lions ground game is averaging 53.5 yards per contest, and Ameer Abdullah leads the way with 59 yards and one touchdown. Defensively, Detroit is allowing 29.5 points and 416.5 yards per game. Glover Quin leads the Lions with 13 tackles, Ezekiel Ansah has two sacks and Darius Slay has an interception. Brandon Pettigrew, DeAndre Levy and Caraun Reid are questionable.

Honestly, the Broncos are lucky to be unbeaten, as Manning looks like a shell of himself and the offensive line can't protect. This will be the Lions home opener and it's pretty much a must-win after an 0-2 start.

I like the Lions to win this game outright, which is why I'm saying keep the points.

The pick in this article is the opinion of the writer, not a Sports Chat Place site consensus.
Previous Pick
Seahawks vs. Bears - 9/27/15 NFL Pick, Odds, and Prediction
Next Pick
Denver Broncos at Detroit Lions 9/27/15 NFL Score, Recap, News and Notes