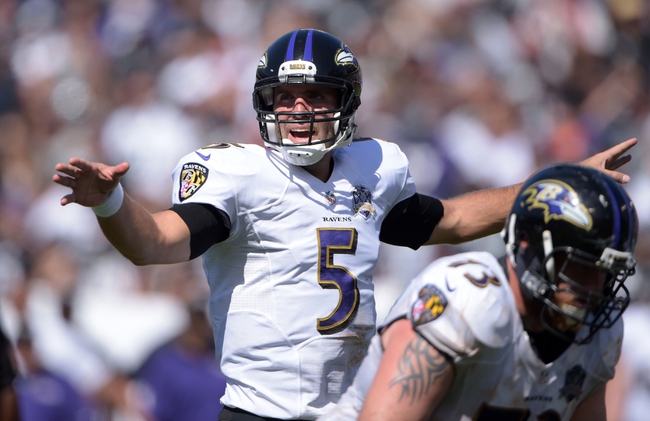 The Cincinnati Bengals and Baltimore Ravens square off Sunday at M&T Bank Stadium.

The Cincinnati Bengals look to keep the ball rolling after a quick 2-0 start. Andy Dalton is completing 68.3 percent of his passes for 483 yards, five touchdowns and zero interceptions. Dalton has gone two straight games without a pick for the first time since the first two games of last year. Tyler Eifert and A.J. Green have combined for more than 260 receiving yards and four touchdowns while Marvin Jones has four touchdowns. The Cincinnati Bengals ground game is averaging 151 yards per contest, and Giovani Bernard leads the way with 186 yards on 28 carries. Defensively, Cincy is allowing 16 points and 300 yards per game. Adam Jones leads the Bengals with 19 tackles, Carlos Dunlap has 2.5 sacks and Vincent Rey has an interception. Marcus Hardison is questionable with an injury.

The Baltimore Ravens are still looking for their first win after a rough 0-2 start. Joe Flacco is completing 64.9 percent of his passes for 501 yards, two touchdowns and three interceptions. Flacco has thrown a pick in four of his last six games. Steve Smith Sr. and Crockett Gillmore have combined for more than 270 receiving yards and two touchdowns while Kamar Aiken has six receptions. The Baltimore Ravens ground game is averaging 91 yards per contest, and Justin Forsett leads the way with 111 yards on 29 carries. Defensively, Baltimore is allowing 28 points and 333.5 yards per game. C.J. Mosley leads the Ravens with 15 tackles, Jimmy Smith has an interception and Chris Canty has a sack. Eugene Monroe and Rashaan Melvin are questionable with injuries.

The Bengals are playing some solid football, but this is pretty much a must-win game for the Ravens as well as their home opener. Also, it only seems like a matter of time before the real Dalton shows up. Remember, Dalton started last season off hot before becoming a turnover machine.

Give me Baltimore the tiny chalk.