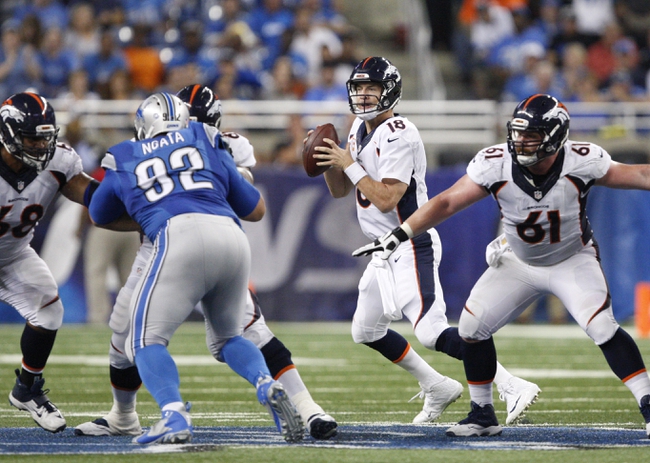 In the Week 3 edition of “Sunday Night Football,” we had a rather intriguing matchup between the Broncos and the Lions. Denver came into this one off another less-than-impressive victory over the Chiefs, while the Lions dropped a game against divisional rival Minnesota in Week 2. Both teams needed a strong showing here, but only Denver got it.
Let’s check out some of the key players and stats from this one so we can figure out why things happened the way they did. Afterward, we’ll check out what’s in store for both teams in Week 4.

What Happened: Neither team could score in the first quarter as the offenses felt each other out. The tie was broken in the second, when Ronnie Hillman of the Broncos scored on a 1-yard TD run. Joique Bell would answer for the Lions with a 1-yard TD of his own, but the extra-point kick was blocked and Denver maintained the lead. They’d pad the score late in the half on a beautiful 45-yard TD pass from Peyton Manning to Demaryius Thomas.
That made it 14-6 Broncos at the break.
In the third, the only scoring came on an Ameer Abdullah 16-yard TD reception from Matthew Stafford. The 2-point conversion would fail and Denver kept the lead.
Scoreboard-wise, it was all Broncos in the fourth. They’d score on a 48-yard Brandon McManus field goal and again on an 11-yard TD hookup from Manning to Owen Daniels late in the game.
At the final horn, it was 24-12 Broncos. Denver remains undefeated at 3-0 as they were in 2013 when they went to the Super Bowl. The Lions, meanwhile, are 0-3 for the first time since 2010, when they went 6-10 on the year.

The Stars: Old man Manning showed he’s still got it on a 31-of-42 passing line for 324 yards, two touchdowns and a pick. His main beneficiary was Thomas, who logged nine receptions for 92 yards and a score. The defense really helped out here, providing lots of pressure on Stafford all night.
On the other side, there’s not a whole lot to get excited about statistically. Calvin Johnson had eight grabs for 77 yards, but failed to get into the end zone.

The Goats: Take your pick--there’s a lot to choose from. We’ll start with Stafford, who accounted for three turnovers himself. He didn’t get much chance to read coverage without a defender in his face, though. Then there’s the lack of a running game: the Lions could only generate 29 yards on 18 carries.
This was a pretty sloppy game as well; each team posted nine penalties for a grand total of 18.

Injuries: The Broncos’ C.J. Anderson left this one briefly in the first half and was evaluated for a concussion. He was able to return to the game after gaining clearance.

Outlook: Looking ahead to Week 4, the Broncos will be back in action at home against the Vikings on Sunday, October 4 at 4:25 PM ET on FOX.
The Lions will get another primetime game when they travel to Seattle to visit the Seahawks on Monday, October 5 at 8:30 PM ET on ESPN.