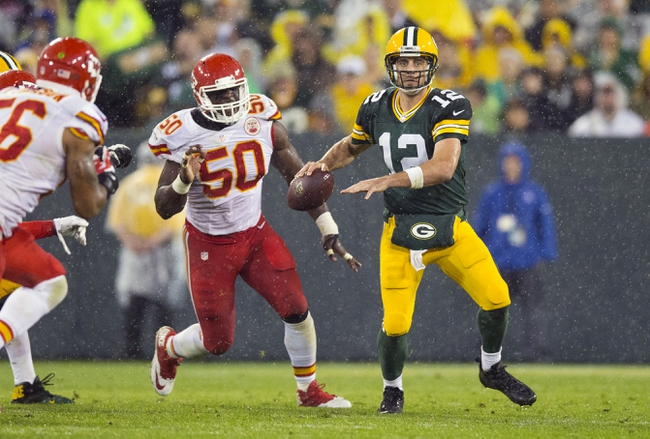 Wrapping up the Week 3 NFL action on “Monday Night Football,” we had a solid matchup between the Packers and the Chiefs. Kansas City was coming off a stunning loss to the Broncos way back on the 17th, while Green Bay was able to take care of business against the Seahawks in Week 2. The Packers looked even better here.
Let’s check out a few of the key stats and players from this one so that we can figure out why things played out the way they did. Afterward we’ll look ahead to Week 4 to see what’s in store for both teams.

What Happened: Aaron Rodgers and the Green Bay passing game got it going quickly, kicking things off with an 8-yard TD pass to Ty Montgomery. A short time later, Rodgers found Randall Cobb for a 3-yard score. It was 14-0 after one.
In the second, Jamaal Charles got his team on the board with a nice 8-yard TD run to make it 14-7. That’s as close as KC would get, however; Mason Crosby nailed a 44-yard field goal shortly before Rodgers found James Jones for a 27-yard passing score. At the break, it was 24-7 Packers.
In the third, Rodgers and Cobb hooked up again with a 4-yard pass TD. Jeremy Maclin and Alex Smith responded with a 5-yard touchdown, which concluded the scoring for the quarter.
Green Bay struck again in the fourth with another Rodgers-Cobb 4-yard TD hookup, which would end the home team’s scoring for the evening.
Kansas City mounted a commendable comeback late with a pair of Charles TD runs from four and seven yards out, but it wasn’t enough.
The Packers would go to 3-0 on the season, while the Chiefs fall to 1-2.

The Stars: What can we say about Rodgers that hasn’t already been said? He was masterful again in this one, going 24-of-35 for 333 yards and five touchdowns. Jones (139 yards; TD) and Cobb (91 yards; 3 TD) each caught seven balls. The Green Bay defense came up with seven sacks and an interception.
On the other side, Maclin had a nice game with 141 yards and a score on eight receptions.

The Goats: The Chiefs couldn’t really get a rhythm going on offense, as they were in comeback mode the whole game. Charles had just 11 rushes for 49 yards and the team couldn’t sustain drives. They went just 2-of-10 on third down.
The Packers don’t get away clean here--they posted 12 penalties for 89 yards.

Injuries: Packers wide receivers Davante Adams and Ty Montgomery came off limping in the first minutes of the game. Montgomery was fine; Adams had to ice his ankle on the sideline. Andrew Quarless was also injured in this one (knee), as were Dante Jones (possible concussion) and Jake Ryan (hamstring).
Chiefs DB Phillip Gaines sustained an injury to his left knee and headed to the locker room.

Outlook: Looking ahead to Week 4, both teams will be back in action on Sunday, October 4. The Chiefs will travel to Cincinnati to visit the Bengals (1:00 PM ET on CBS), while the Packers will head over to the west coast to see the 49ers (4:25 PM ET on FOX).