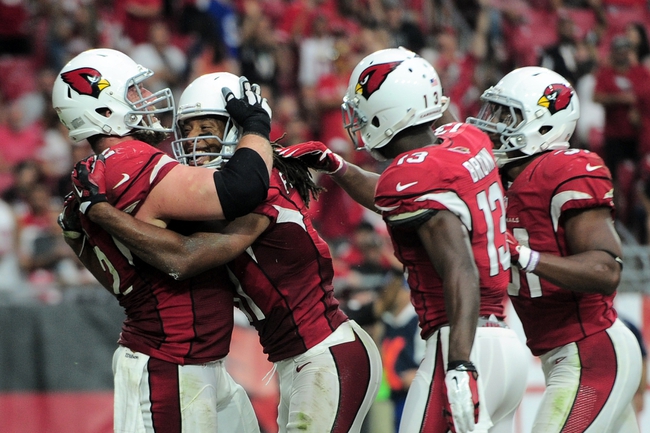 Another NFL week in the books but unlike week two there were very few if any eliminated from their survivor pools as it was a pretty standard weekend in terms of favourites winning football games and the only upsets can in the form of toss up games anyways. However, with one of the big dogs unavailable this weekend thanks to New England's bye and some other league powers in some tough matchups things may not be as comfortable in week three. We count down our top plays, pool breakers, and pool makers in this installment of our NFL Survivor Pool coverage.

The Niners have fallen on hard times and even though they got a win in week one against the Vikings they look like a winless football team and last weekend's effort against the Cardinals was far and away the worst game we have seen since Colin Kaepernick took over as the team's starting pivot. San Fran has gone from a perennial Super Bowl contender to threatening a top three draft pick and if thigns don't turn around in a hurry there could be some major changes coming. Green Bay on the other hand continues to be among the league's elite and Aaron Rodgers continues to prove he is one of the best if not the best quarterback in the league right now and his performance against the Chiefs on Monday night was spectacular. This is a road spot for the Pack but even still they should have no trouble taking care of San Fran who won't have the luxury of utilizing Carlos Hyde as they will likely be trailing early and often.

The Arizona Cardinals are quickly becoming the sexy pick in the NFC and for good reason as they have coasted through the first three weeks of the season and are doing something we are not used to seeing from them: scoring points in bunches. A rejuvenated Larry Fitzgerald, a healthy Carson Palmer, an opportunistic defense, and a serviceable running game has the Cards undefeated and atop the NFC West and they will look to move to 4-0 with a win against their division rivals from St. Louis on Sunday. The Rams are a tough team to figure out as the upended the Seahawks in week one but have gone down hill from there losing games to Washington on the road and Pittsburgh at home in a game where they managed just three field goals against a respectable but not elite Steelers defense. Now they have to go into the desert to take on one of the best teams in the league to face that defense and somehow keep Palmer and the gang at bay? Good luck Jeff Fisher.

Yes, you read that correctly. The Buffalo Bills of years gone by are no more and while we have seen fast starts from this team before I think this year's group is here to stay and they pose a serious threat to all AFC wild card contenders. Buffalo returns home to take on the New York Football Giants at the Ralph in a game where the Bills' defense should be fired up and against a weak offensive line and an immobile quarterback the Bills are going to feast. Eli is still a legit franchise quarterback and Odell Beckham is going to be a star in this league for years to come but they have fallen on hard times and will likely fall well short of the playoffs this season and this is just a terrible matchup. It looks like they will be without Victor Cruz again as he continues to nurse an offseason injury which means they can run doubles on Beckham and focus on Reuben Randle. Offensively, Buffalo should be able to stetch the field thanks to their ground game and with both Sammy Watkins and Percy Harvin able to get down field and Tyrod Taylor seemingly finding his groove I think this is a great spot to take the Bills.

The Falcons have quietly pieced together an impressive start to the season and a large part of that goes to Julio Jones whose 34 catches through three weeks is an NFL record and he is on pace to shattering a handful of single seasons and single game marks. Atlanta is in the driver's seat in the NFC South despite the Carolina Panthers also sitting with an unblemished mark but I do think the Birds are the better of the two teams overall and the division is Atlanta's to lose at this point pending Jones stays healthy. Atlanta hosts the Texans this weekend and while they aren't world beaters by any means they are starting to play better football and they do have a lot of weapons at their disposal especially if they get Arian Foster back this weekend. The Texans may not have a ton of help at quarterback with Ryan Mallett slowly getting used to things but Deandre Hopkins, Nate Washington, and an arsenal of running options makes things a lot easier and with Houston's defense being very strong the Texans could be a dark horse team in the AFC South. This is a game I suggest staying away from as Atlanta is good at home but the Texans might have their bell cow back and this just screams trap game.

The Eagles were on our radar last weekend as a team destined to get in the win column and we recommended staying away from the Jets as a survivor pick and lo and behold the Eagles came up big and got their first win of the season. We are back on the Eagles in this spot again this week but on the other side as this looks like it is going to be an ugly affair between two bitter NFC East rivals and in fact the game may not even take place if inclement weather plays a role. If the game does go though the DC area is destined for terrible, rainy weather which means a lot of turnovers and a lot of work on the ground and with so much unpredictability in a situation like that it is best to just stay away. Add in the fact that Desean Jackson is playing against his former team and it just makes matters worse for the Eagles who may take a step back this week after usch progress last week.

There. I did it. I drank the Kool-Aid. It has been a long 12 years for me as a fan of the Oakland Raiders but things may (finally) be turning around for the Silver and Black. Oakland was calculated and effective in a very impressive victory against the Cleveland Browns last week in a stadium that is never easy getting a win. The Raiders are riding the play of their young guns on offense as Latavius Murray, Derek Carr, and especially Amari Cooper have stepped up in a big way and with Khalil Mack and Aldon Smith disrupting the pass on defense and Charles Woodson continuing his Hall of Fame career things are looking very nice in Oakland. I was a little cautious here though as the Raiders of old always seem to get into a position where they look good one week and then flop the next and this could very well be one of those circumstances but the Bears sans Cutler might be the worst team in the league. Chicago is unloading and there may be more roster moves on the horizon but with Cutler and Jeffery likely out again this week it looks like a perfect time for the Raiders to get another road win and to finish the week at... 3-1.

The pick in this article is the opinion of the writer, not a Sports Chat Place site consensus.
Previous Pick
Top Ten Worst 2015 NFL Week 3 Injuries
Next Pick
Steelers vs. Ravens - 10/1/15 NFL Pick, Odds, and Prediction