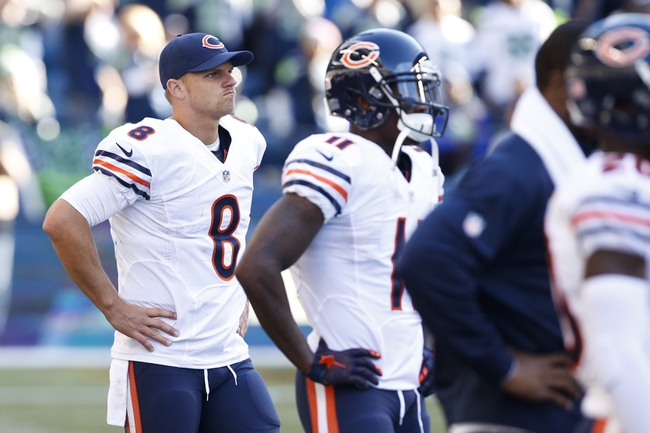 The Oakland Raiders and Chicago Bears square off Sunday afternoon at Soldier Field.

The Oakland Raiders look for back-to-back road victories and improve to 3-1 on the year. Derek Carr is completing 63.3 percent of his passes for 726 yards, five touchdowns and one interception. Carr has a touchdown pass in six of his last seven games. Amari Cooper and Michael Crabtree have combined for 474 receiving yards and two touchdowns while Marcel Reece has five receptions. The Oakland Raiders ground game is averaging 105 yards per contest, and Latavius Murray leads the way with 248 yards and two touchdowns. Defensively, Oakland is allowing 28.7 points and 414.7 yards per game. Malcolm Smith leads the Raiders with 26 tackles, Khalil Mack has two sacks and Charles Woodson has an interception. Benson Mayowa, Jamize Olawale and Justin Ellis are questionable.

The Chicago Bears are in a must-win situation after a rough 0-3 start. Jimmy Clausen is completing 57.5 percent of his passes for 184 yards, zero touchdowns and one interception. Jay Cutler is still questionable with a hamstring injury. Martellus Bennett and Alshon Jeffery have combined for 196 receiving yards and one touchdown while Eddie Royal has 11 receptions. The Chicago Bears ground game is averaging 132 yards per contest, and Matt Forte leads the way with 276 yards and one touchdown. Defensively, Chicago is allowing 35 points and 331 yards per game. Shea McClellin leads the Bears with 23 tackles, Pernell McPhee has two sacks and Jared Allen has an interception. Jermon Bushrod, William Sutton and Jon Bostic are questionable.

The Raiders are slowly startin to gain confidence behind this young group of guys, and Carr is stepping up in a big way. The Bears have looked awful for much of the season and the QB situation makes Chicago nearly unbackable. I'm taking the Raiders and the small chalk on the road in more of a fade from the Bears.