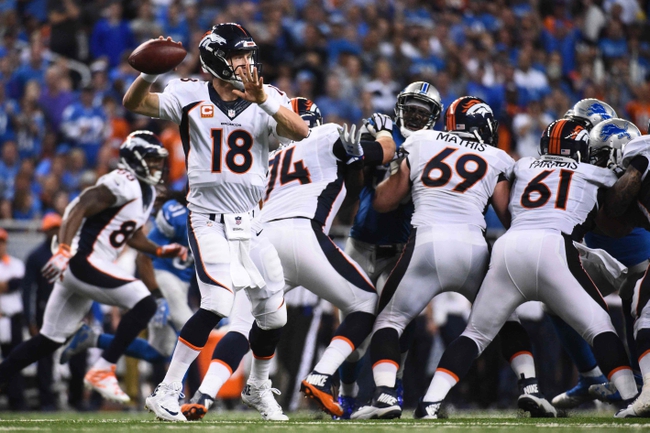 The Denver Broncos and the Minnesota Vikings face off on Sunday in Denver in a week four NFL matchup.

The Denver Broncos are off to a 3-0 start and return home after two weeks on the road. The Broncos offense is averaging 24.7 points and 290.7 yards per game and they have a plus six turnover ratio. Denver QB Peyton Manning is picking up off of his slow start and he has now completed 63.8 percent of his passes with five touchdowns and three interceptions. The Broncos running game has been ineffective as C.J. Anderson has rushed for just 74 yards while Demaryius Thomas leads in receptions with 24 and Emmanuel Sanders has 22. The Broncos defense has been outstanding allowing 16.3 points and a NFL best 259 yards per game with six interceptions, four fumble recoveries, and 11 sacks. Brandon Marshall is Denver’s top tackler with 24, Danny Trevathan has 20 tackles, and Darian Stewart has 16 tackles. The Broncos are looking better each week and should be a force once again this season.

The Minnesota Vikings are off to a 2-1 start after losing their opener and then winning their next two games. The Vikings offense is averaging 20 points and just 294 yards per game and they are plus three in turnovers. Minnesota QB Teddy Bridgewater completed 67.6 percent of his passes with one touchdown and two interceptions. The Vikings ground game is back in the hands of Adrian Peterson who has rushed for 291 yards and two touchdowns and Mike Wallace and Kyle Rudolph each have 12 catches. The Vikings defense has been outstanding allowing 16.7 points and 362.3 yards per game with two interceptions, six sacks, and three fumble recoveries. Harrison Smith is the Vikings leading tackler with 23, Anthony Barr has 20, and Everson Griffen has three sacks. The Vikings still have yet to play their best football.

This just looks like a lot of points for this one and I will take the points and the road dog in a game that looks like a coin flip for the outright win.