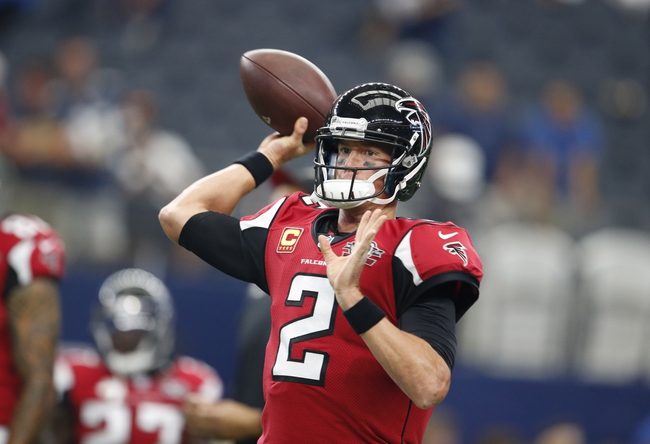 The Houston Texans and Atlanta Falcons square off Sunday afternoon at Georgia Dome.

The Houston Texans look to get to a .500 record and pick up their first road win of the year. Ryan Mallett is completing 53.6 percent of his passes for 570 yards, three touchdowns and two interceptions. Mallett has a touchdown pass in five straight games. DeAndre Hopkins and Nate Washington have combined for 462 receiving yards and three touchdowns while Cecil Shorts III has 16 receptions. The Houston Texans ground game is averaging 115 yards per contest, and Alfred Blue leads the way with 187 yards and one touchdown. Defensively, Houston is allowing 20 points and 332.7 yards per game. Brian Cushing leads the Texans with 22 tackles, J.J. Watt has three sacks and Johnathan Joseph has six pass deflections. Arian Foster, Xavier Su'a-Filo and Duane Brown are questionable.

The Atlanta Falcons hope to get off to an impressive 4-0 start to the year. Matt Ryan is completing 66.4 percent of his passes for 946 yards, five touchdowns and two interceptions. Ryan has a touchdown pass in 18 of his last 19 games. Julio Jones and Leonard Hankerson have combined 578 receiving yards and five touchdowns while Jacob Tamme has eight receptions. The Atlanta Falcons ground game is averaging 106.3 yards per contest, and Devonta Freeman leads the way with 184 yards and four touchdowns. Defensively, Atlanta is allowing 24 points and 378 yards per game. Justin Durant leads the Falcons with 27 tackles, Vic Beasley Jr. has two sacks and William Moore has three pass deflections. Devin Hester and Tevin Coleman are questionable.

The Texans may be 1-2, but both of their losses were by one score. Houston has played well up to this point and has the aggressive defense that can keep Ryan and the Falcons on their toes. All of the Falcons games this season have been close and come to the wire for the most part.

I like Atlanta to get the victory here, but the Texans should be able to keep it close.