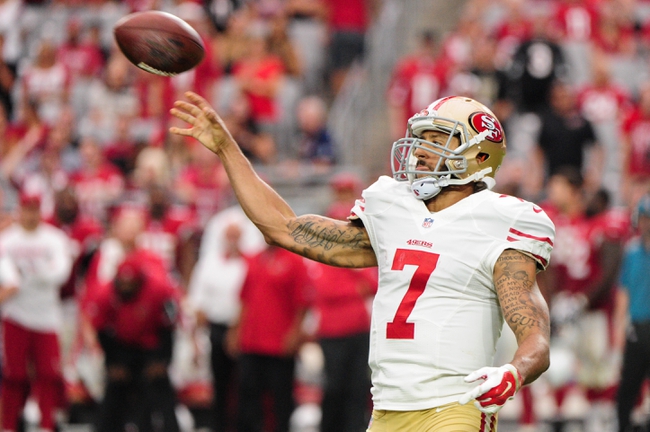 The Green Bay Packers hope to remain undefeated by picking up their second road victory. Aaron Rodgers is completing 73.6 percent of his passes for 771 yards, 10 touchdowns and zero interceptions. Rodgers has not thrown a pick in five straight games. Randall Cobb and James Jones have combined for 464 receiving yards and eight touchdowns while Richard Rodgers has eight receptions. The Green Bay Packers ground game is averaging 127.7 yards per contest, and Eddie Lacy leads the way with 140 yards and one touchdown. Defensively, Green Bay is allowing 22.7 points and 350.7 yards per game. Ha Ha Clinton-Dix leads the Packers with 22 tackles, Julius Peppers has 2.5 sacks and Damarious Randall has four pass deflections. Andrew Quarless and Demetri Goodson are questionable while Davante Adams is doubtful.

The San Francisco 49ers need a victory here to get back to a .500 record and snap a two-game skid. Colin Kaepernick is completing 64.8 percent of his passes for 567 yards, two touchdowns and four interceptions. Kaepernick is coming off a four-interception game against the Cardinals. Torrey Smith and Anquan Boldin have combined for 243 receiving yards and two touchdowns while Garrett Celek has eight receptions. The San Francisco 49ers ground game is averaging 148 yards per contest, and Carlos Hyde leads the way with 262 yards and two touchdowns. Defensively, San Fran is allowing 31 points and 382.3 yards per game. NaVorro Bowman leads the 49ers with 20 tackles, Tramaine Brock has two pass deflections and Aaron Lynch has two tackles for loss. Bruce Ellington, Reggie Bush and Vernon Davis are questionable.

I don't like the fact the Packers are traveling out west on short rest after playing Monday night. Also, the 49ers have beaten the Packers outright in the last four meetings, all of which took place since 2012. The 49ers will also be eager for a bounce back performance after getting beat up by Arizona.

Sure, Green Bay still probably wins this game, but I can't turn down this many points and the home team.